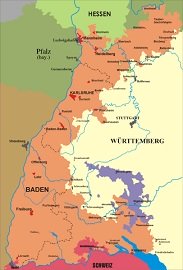 Prior to the North German Confederation, German States stamps were issued by most of the separate Germanic kingdoms, duchies, free-cities, etc. of Northern Europe..

The last Grand Duke of Baden, Frederick I (1852-1907), was an ally of Prussia and helped to found the German Empire, which Baden joined in 1871. In 1918, following the end of World War I, Baden became part of the Weimar Republic, as the Republic of Baden. It is now part of the German state of Baden-Württemberg.

The first German States stamps for the Grand Duchy of Baden appeared in May of 1851. The stamps were typographed, imperforate, and printed in black on pale buff, orange, blue green, and deep rose papers. They are shown in the first row in the scan above (Mi. #1a-4a, Sc. #1a-4a).  The paler paper shades do not show up well in the scan above.   Especially that of the 1 Kr. on pale buff paper.

These stamps were again printed in August of 1851 on dark buff, yellow, yellow green, and lilac rose papers, continuing through the middle of 1852. These are shown in the second row of the scan above (Mi. #1b-4b, Sc. #1-4).

In 1865, all the first issues were reprinted on thick paper, except for the 6 Kr. black on yellow, which was reprinted on thin paper. The reprints are worth far less than the originals. 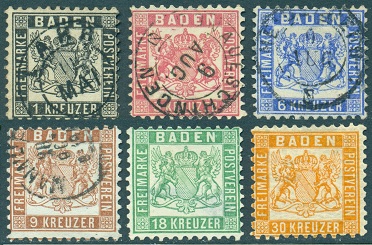 In 1862, a special set of stamps was issued to pay "Rural Postage Due". They were all printed in black on yellow paper, as shown above (Mi. Landpost #1-3, Sc. #LJ1-3). Used copies are rare, and fake cancellations abound.


At the beginning of 1872, the German States stamps for the Grand Duchy of Baden were replaced by those of the German Empire.