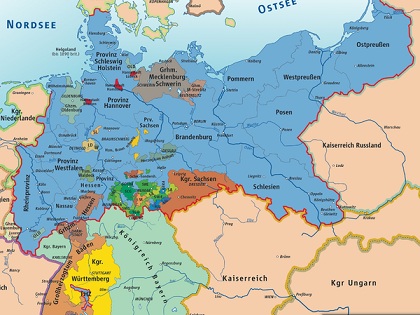 German States stamps, prior to the German Unification, were issued by the individual Germanic states or free cities.  The stamps for the former British Protectorate of Heligoland (German: Helgoland) are also included in this category.

The House of Thurn and Taxis, while not a state, transported mail, and in 1852, they also began issuing their own postage stamps. The House of Thurn and Taxis had existed, as a postal service for the European kingdoms, since 1497, when the Holy Roman Emperor, Maximilian I, commissioned Franz von Taxis to establish a postal service to carry official mail.

When the northern German states joined in the North German Confederation in 1868, they discontinued their own postal services and became part of the "North German Postal District", or "Norddeutscher Postbezirk".

After the German unification and the establishment of the German Empire in 1871, imperial postage stamps were issued for use in all but two of the former German states.

Thurn and Taxis - A Brief History