Saying that these stamp issues are for the German occupation of Poland, as the Scott Catalog states, is a bit misleading. In 1915, there was no such place as "Poland". It had not existed as a nation since 1795. Michel calls these stamps, issues for the German Post Offices in Poland.

These stamps were actually issued for use in ethnic Polish cities and towns that were in Russian imperial territory, as they came under occupation. These stamps were primarily used by war-time post offices in Częstochowa, Lodz, Sosnowiec, Warsaw, and Zawiercie.

On May 12, 1915, five stamps of the contemporary Germania-type definitive series were overprinted "Russisch / Polen", or "Russian Poland" in English. All of them are shown in the image above (Mi. #1-5, Sc. Poland #N1-5), except for the 40 Pf. denomination. 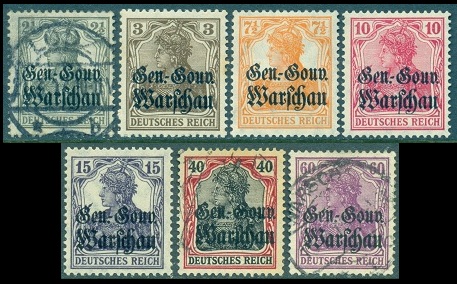 All of the stamps in this set exist in varying shades, as well as with glazed and matte overprints.  Most of these Russian Poland issues are not terribly expensive.

There were also a number of local stamp issues for Otwock, Sosnowice, Warsaw, and Zawiercie.  Though scarce, they are not terribly expensive, as well.  See the Michel Deutschland-Spezial-Katalog Vol. I for details.

In 1917, the Russian October Revolution resulted in the overthrow of the Czar, and a new Communist state was established. Weary from three long years of War with Germany and Austria, they stopped fighting, thus ending World War I on the Eastern front. This enabled the Germans and Austrians to focus on the war in Western Europe, rather than the two-front war they had both been fighting since 1914.