In 1914, the commander of the Eastern (Front) Command was General Paul von Hindenburg.  In 1916, he was replaced as commander by Prince Leopold of Bavaria.

These stamps were intended for use in Lithuania and South Kurland, and from 1918, also in Estonia, Livonia, and North Kurland. 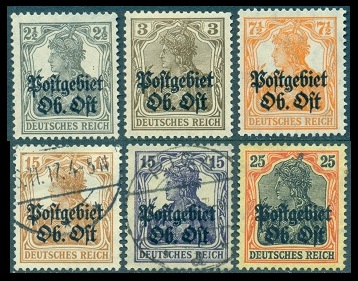 One might note that a couple of the stamps above have Riga cancellations. Riga, at that time, was a free city in association with the Duchy of Kurland.

For details on all the varieties of this issue, please refer to the Michel Deutschland-Spezial-Katalog Vol. I.

For collectors, these "official" issues were all widely used, and most of them are relatively inexpensive today.

Within the scope of the Eastern Command, there are also local stamp issues for Dorpat, Bialystok, Grodno, the German 10th Army, and the rather noteworthy ones for Libau.  The prices of most of the local occupation stamps range from expensive to obscene, being from the hundreds to the thousands of Euros!