Before the Soviet Occupation and German Occupation of Lithuania, their primary post World War I territorial foe was Poland, but that was about to quickly change.

Under the provisions of the Molotov–Ribbentrop Pact, the Soviet Union annexed Lithuania in 1940, and it became the Lithuanian Soviet Socialist Republic. All political, cultural, and religious organizations were banned, and almost all banks, private property, farms, and larger private businesses were nationalized. The USSR sent some 17,000 Lithuanians to prison camps in Siberia, from which most of them never returned, and many political prisoners were massacred by the Red Army. These events were key in fostering support for the Nazis within Lithuania.

On June 23, 1941, the Third Reich occupied Lithuania, during its invasion of the Soviet Union. At first, the Lithuanians considered the Nazis as liberators from the repressive Soviet regime, and they hoped that the Germans would re-establish their independence. Unfortunately, the Germans did not recognize the re-established Lithuanian government, and in July 1941, they established their own civil administration under the Reichskommissariat Ostland.

The Third Reich considered the Lithuanian people to be sub-human. The Nazis' real plan for Lithuania was to deport or exterminate the Lithuanian population, within 20 years after the war, and to replace the population with a combination of Germans and "Germanized" Lithuanians.

During World War II, it is estimated that some 250,000 residents of Lithuania perished. This includes the Soviet and German deportations and the Holocaust. Of that number, about 200,000, or over 90% of the Jewish population of Lithuania, were exterminated during the Holocaust.

In the Summer of 1944, the Red Army occupied Lithuania, and it once again became a state of the USSR, the Lithuanian Socialist Republic. It wouldn't be until 1991, before Lithuania would again become an independent nation. 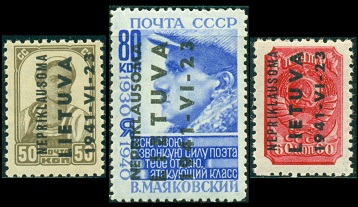 At the beginning of July 1941, the German Occupation government overprinted nine of the contemporary USSR postage stamps, for use throughout Lithuania. All of them, except for the 2 Kop. denomination, are shown above (Mi. #1-9, Sc. N/L). The stamps were overprinted "NEPRIKLAUSOMA / LIETUVA / 1941-VI-23" vertically. In Lithuanian, NEPRIKLAUSOMA means "INDEPENDENCE".

During this period, many Lithuanian towns also applied their own local overprints to existing stocks of USSR postage stamps. These overprints come in many styles and types. The local stamps for Vilnius, Panevezys, Raseinial, Rokiskis, Telsiai, and Zarasai are scarce but relatively affordable. The local stamps for Alsedziai and Ukmerge are rare and very expensive.

These provisional issues were replaced by the Third Reich issues for the Reichskommissariat Ostland, which were German postage stamps overprinted "OSTLAND".

Like many of the local postage stamps of World War II, forged overprints exist on these Lithuanian stamp issues. The Michel Catalog indicates that the valuations for ALL the German occupation issues for Lithuania are for stamps that are "authenticated" (geprüft).