From 1914 to 1918, German occupation stamps were issued for the occupation of Belgium. These were intended for the "Landespost" or "National Post Offices" within the "Generalgouvernment Belgien" or the "General Government of Belgium".

The contemporary definitive postage stamps of Germany were utilized for these two issues.  With the vast number of overprint varieties used on the Belgian issues, this could be a philatelic specialty in itself.

There are many varieties in all of the Belgium overprints and re-valuations.  For those interested in specializing in this area, please refer to the Michel Deutschland-Spezial-Katalog Vol. I.

The re-valuations on the Pfennig denominations were spelled out as "Centimes", and on the Mark high denominations, they were abbreviated as "Fr".

The Centimes on Pfennig re-valuation issues come with two different overprint settings.  The 75 Centime on 60 Pf. comes in two different shades.  Most of the stamps with this format and their many varieties are relatively affordable. 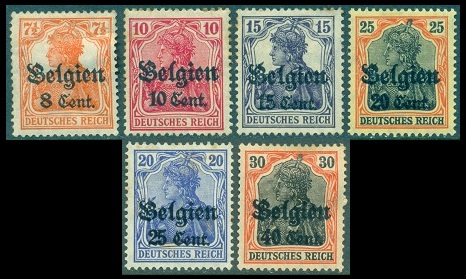 This series includes many overprint settings and varieties, as well as multiple shade varieties on the lower denominations, and perforation hole variations on the Representative Subject high denominations.

As Belgium and the Western Front were where much of World War I was fought, these issues were all widely used, and today, all but a few of them are very affordable, both in mint and in used condition.