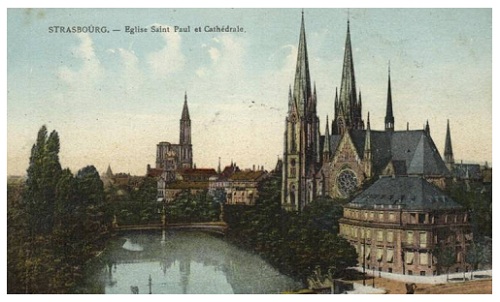 Strasbourg
From: An Old Postcard

The alternating German occupation - French occupation of Alsace has been ongoing for centuries now.

The Alsace -- Elsaß or Elsass in German -- region is located on France's Eastern border and on the West bank of the upper Rhine River, adjacent to Germany and Switzerland. The political, economic, and cultural capital, as well as largest city of Alsace, is Strasbourg. The historical language of Alsace is Alsatian, a Germanic dialect, though French is mostly spoken there today.

From the 10th Century, Alsace was part of the Holy Roman Empire, however it was annexed by France during the 17th Century. Following the Franco-Prussian War, the Alsace region was annexed to the German Empire in 1871. After World War I, the region was returned to France, and in 1940, the region once again was occupied by Germany. 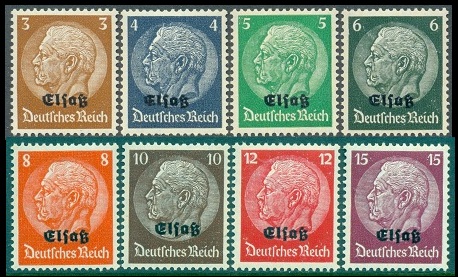 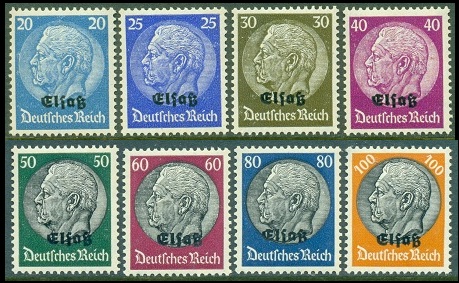 The sixteen of overprinted German stamps shown above (Mi. #1-16, Sc. France #N27-42) were issued on August 15, 1940, for use in the newly occupied Alsace region. They were valid for postage until December 31, 1941, when they were replaced by the postage stamps of the Third Reich.

No noteworthy variations of these issues are mentioned in the Michel catalogs.  The set is priced at 40 Euros for mint never hinged condition and 34 Euros for used condition.  Thus one can COMPLETE the wartime issues for Alsace for a very minimal investment!


In December 1944, following the allied liberation of Alsace, the Hitler definitive Third Reich postage stamps of 1941 were overprinted with a large "V" and "RF / V / SAVERNE / LIBRE".  The Michel catalog states that these local stamp issues WERE NOT officially authorized.


After World War II, the Alsace region was returned to France, and French postage stamps have been used there since then.