Offices in the Turkish Empire

The German Empire, post offices in the Turkish Empire, offers many wonderful examples of postal history for philatelic study. Each cover has a story to tell. Investigating the postal markings, origin, and destination of a cover can provide great enjoyment to the student of postal history.

Three post cards, two from the German offices in the Turkish Empire and the other from steamship mail, are presented below. 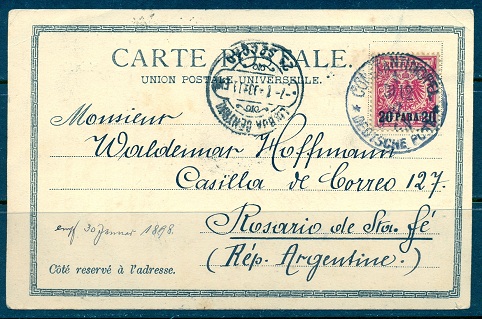 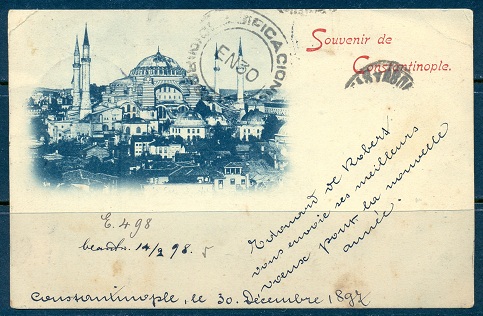 Card has New Year’s message in French. Receipt stamp of Rosario de Santa Fe, Argentina on the back, dated EN 30 (January 30). Back of the card features a vignette of the Santa Sophia Cathedral in Constantinople (Istanbul). 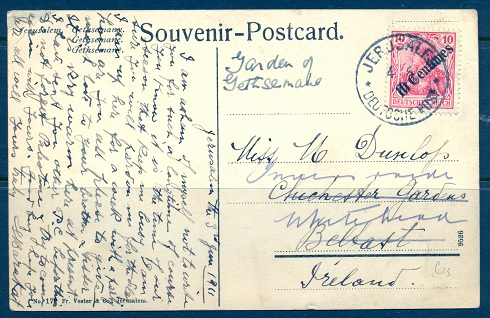 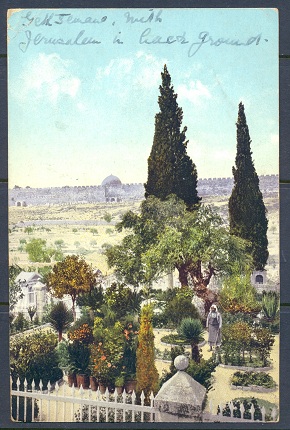 Back of the card features a hand-colored picture of Gethsemane, at the foot of the Mount of Olives, and the walled city of Jerusalem in the distance. 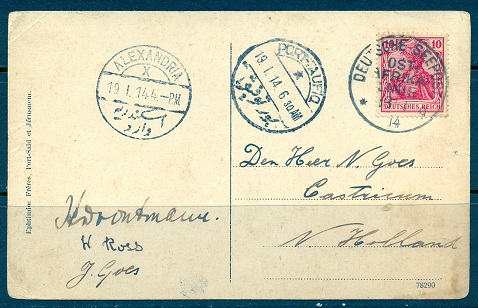 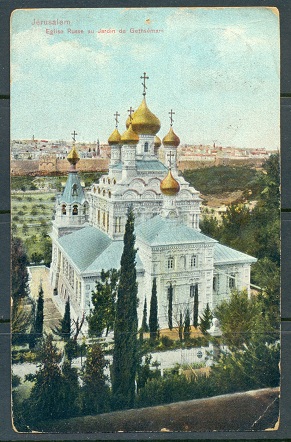 Turn of the 20th Century postcard depicting the Russian Orthodox Church in Jerusalem, Palestine. A 10 Pf. Deutsches Reich Germania stamp was used to mail the card from Palestine and it is tied by a DEUTSCHE SEEPOST / * q / OST- / AFRICA / LINIE / 18 – 1 / 14 Cancel. If this card were mailed from Palestine, it is likely that it was mailed from the Port of Jaffa (Haifa) on board a German ship of the DEUTSCH OST-AFRICA LINIE.

The card received a transit cancel the next morning, at Port-Taufiq, Egypt, and it appears to have entered the Egyptian mail service there. The cancel reads, PORT-TAUFIQ / 19.1.14 6 30 AM. Port-Taufiq was actually one of the harbors within the Port of Suez, Egypt. That same day, the card reached Alexandria, Egypt, and received another transit cancel, ALEXANDRIA / 19.1.14 4.- PM. From there, the card probably used another means of transportation, probably another steamship, to finally get to the addressee in Holland.

The rest of the voyage of this postal history item is a mystery, as there are no other postal markings on the card.