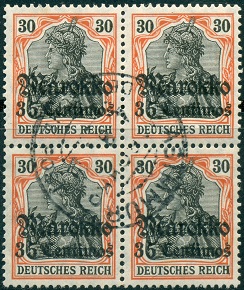 Collecting postmarks of the German Empire post offices abroad can be educational AND rewarding.

Germans of the late 19th and early 20th Centuries loved to travel, with North Africa and the Mediterranean being among their most popular destinations. For the specialist, the availability of stamps, postcards, and postal history of these areas is still pretty abundant.

Historically, European collectors prefer to collect postmarks, either on cover or with the full cancel tied-to-piece. The prices in the German postmark catalog are for these categories. That is not absolutely necessary though. You can still find single, off cover stamps, with fully discernible partial, or almost complete postmarks, which would be a joy for most collectors to own, and they won't "break" your budget. Just recently, I was out on the Germany eBay site looking at cancels, and I was surprised by the fact that many of the postmark lots being offered now are off-cover, single stamps!

Some postmarks are very valuable, but the average worldwide collector or dealer has no specialized knowledge of them, so there is a real opportunity here to acquire some really nice postmarks at a minimal cost.  Some great ways to find postmarked German Empire offices abroad and colonial stamps are from bourse dealers, local stamp stores, collection lots, and my favorite, American Philatelic Society sales circuits.

One word-of-warning!  During the 20th Century some of the more expensive postmarks were forged, particularly those of Arsila!  Some of the forged postmarks have come to light, as a result of the Blum Forgery Case.  For more information, please follow this link to the Blum Forgery Case site.  Solution?  If you are buying a rare and expensive postmark, make sure it is properly authenticated!

For German Empire post offices in Morocco, the following town cancellations are known.  These are the German language names, as they are spelled on the postmarks.

Here are some example postmarks:

Many of the postmarks exist with varying elements within the circular date stamps, some of which are very expensive varieties.  Prisoner of war and maritime postmarks also exist.

For anyone collecting or specializing in the postmarks of the German Offices in Morocco, you MUST HAVE the following specialized catalog.