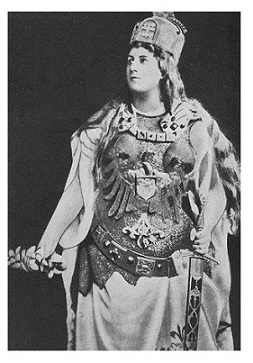 At the beginning of 1900, the German Empire issued a brand new series of definitive postage stamps, featuring the allegorical personification of Germany and other patriotic subjects.

These German Imperial stamps were designed by Paul Waldraff from a portrait of the German actress Anna Führing.  Anna Führing (1866-1929) is shown in an 1891 photograph at left, posing as Germania. She was born in Hamburg to an actor father and was active both in the theater and in silent movies in Germany, but she will be forever remembered as the model for the Germania postage stamp.


First printings, or more properly "essays", of the new 25 Pf., 30 Pf., 40 Pf., 50 Pf., and 80 Pf. Germania definitive postage stamps were initially produced with the "REICHSPOST" inscription being in much taller and thicker letters than that used for the regular printings.

The Michel Catalog more properly refers to these German Empire stamps as "the so-called First Printings". According to the Michel Catalog, these were actually "essays", which were intentionally printed in very small quantities, and which were provided to philatelic publications for the purpose of publicizing the new Imperial German stamps. These stamps  were never officially issued by the German Empire postal authorities, and they were never sent to post offices for sale to the public.

Authentic examples of these varieties are almost never seen on the market, and all of them are VERY expensive. I DO NOT have any of these in my collection, and I have never physically seen any authenticated examples for sale. I found the scan, above, at a German website, after exhaustive searches on the Internet, and it was the ONLY one that I was able to find.

A lot of collectors mistake darkly inked examples of the regularly issued 25 Pf., 30 Pf., 40 Pf., 50 Pf., and 80 Pf. stamps as being these "essays".  Be very careful.  The letters on the essays are physically larger and thicker than those used on the regular issues, barely fitting into the white frame, and sometimes overlapping it.

The fourteen German Empire definitive postage stamps shown above were issued during 1900.  The Michel catalog refers to these new stamps as the Germania and Representative Subjects issue.  All of these German Empire stamps are inscribed "REICHSPOST".  They are printed on unwatermarked paper, and they are perforated 14.

The denominations from the 2 Pf. through the 80 Pf. feature the bust of Germania, wearing armor and the imperial crown.

The designs of the four high-denomination German Empire stamps are as follows.

The Germania and Representative Subject issues catalog attributes are as follows.

The 1900 German Empire Mark denomination types will be described below.  Super-sized images are provided, for additional clarity. 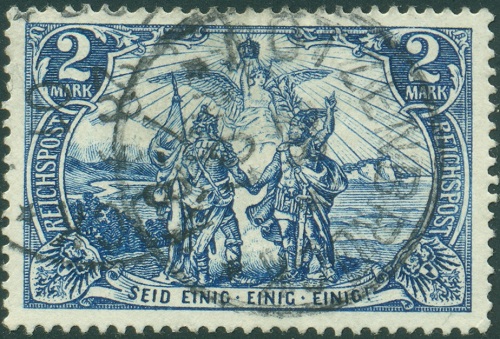 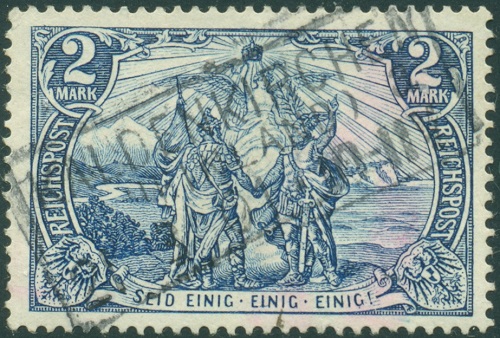 The two types (not listed in the Scott Catalog) of the 2 Mk. denomination are shown above.

In Type 1, the end of the spandrel around the numeral 2 on the left side is "open".

In Type 2, the end of the spandrel is "filled in" with blue coloring.

The Type 2 stamps, in used condition, are worth about TEN TIMES the value of the Type 1 stamps.

The Type 1 stamps, In mint condition, are worth about THREE TIMES the value of the Type 2 stamps.

This offers a great opportunity for the educated specialist in German Empire philately to purchase the scarcer Type 2's from a seller that uses the Scott Catalog to price their stamps, for a very cheap price. 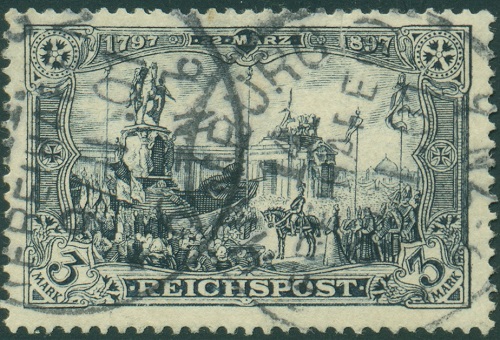 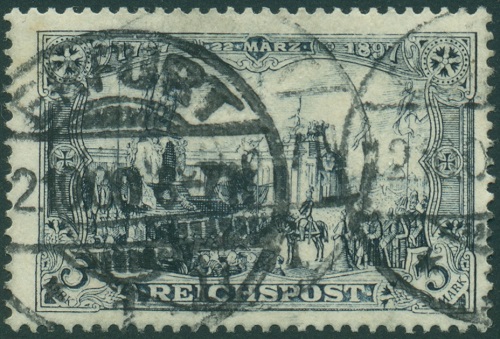 The two types (not listed in the Scott Catalog) of the 3 Mk. denomination are shown above.

In Type 1, the front of Kaiser Wilhelm's breastplate is touching the horse's back, the reins are sagging slightly, and the Kaiser appears to be leaning back slightly.

In Type 2, there is a white space between the front of the Kaiser's breastplate and the horse's back, the reigns are taught, and the Kaiser appears to be sitting more upright.

In Michel, the Type 2 stamps are valued at about 20 Euros more than the Type 1 stamps. 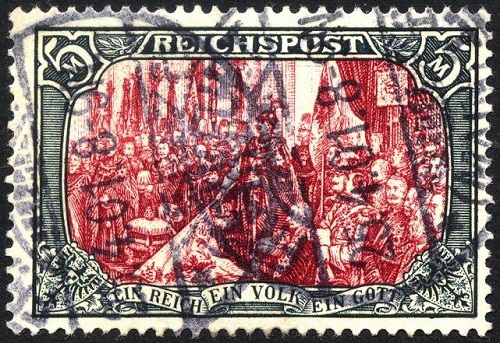 Type I - Original Printing with no Retouching around Vignette 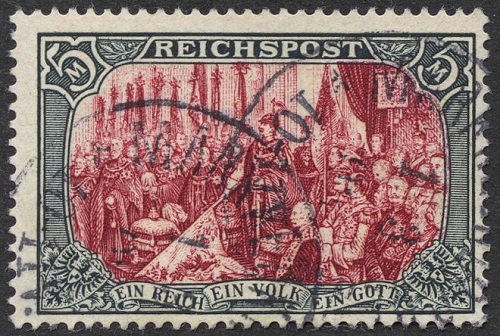 Type I - Vignette Frame Retouched with Red and White 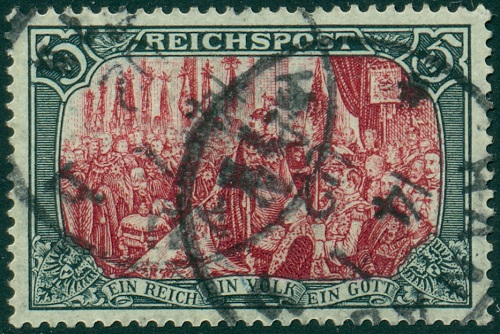 Type I - Vignette Frame Retouched with White Only 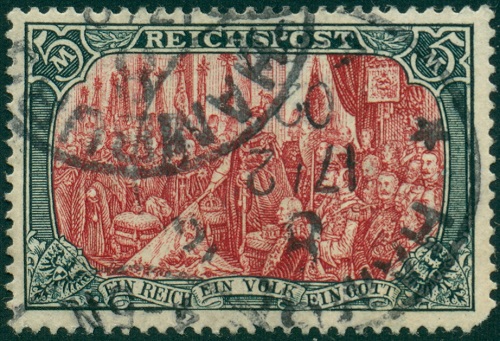 On Type 1, the man at the far right side of the vignette has part of his head cut off by the inner frame, and as a result, his ear is not showing. The numeral "5" is also thicker than Type 2.

On Type 2, the man at the right edge of the vignette has more of his head AND HIS EAR showing. The numeral "5" is thinner than on the Type 1 stamps.

On Type 3 (Major Type I), red and white paint was used to retouch the vignette and / or inner frame line.

On Type 4 (Major Type I), white paint only was used to retouch the inner frame line.

Shown above are a set of modern reprints of the Mark values. Aside from the word "nachdruck" printed on the back, the quality of the reprints is very poor, when compared with the original German Empire 1900 printings. 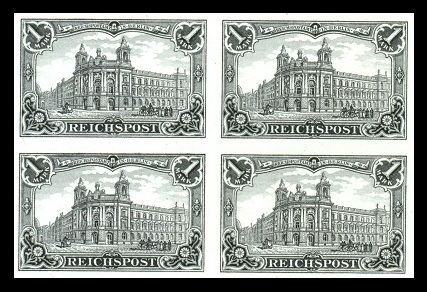 Shown above is a "black-print" PROOF of the 1900 1 Mk. denomination. These were part of a modern commemorative booklet issued by the German Democratic Republic. 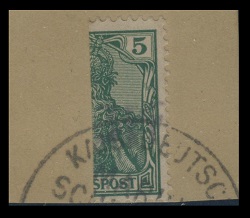 In 1901, a very rare bisected / surcharged provisional version of the 5 Pf. definitive stamp came into being. The German cruiser "Vineta" was docked in New Orleans, and the crew members wished to mail copies of U.S. newspapers reporting celebrations of the Kaiser's birthday home to their relatives. The purser, with the ship commander's approval, bisected 300 5 Pf. stamps and hand surcharged them with "3PF", so the ship's post office could meet the need for a 3 Pf. printed matter rate. It would be safe to assume that any off-cover copies of these stamps are probably forgeries. All purchased examples of these bisects, both on and off cover, require certification, due to their rarity and very high prices.

I would advise against EVER buying an unused example of this bisect. Anyone with a mint 5 Pf. stamp, a mount cutter, a rubber stamp making kit, and an ink pad with dark blue ink can make one of these in about five minutes. That's probably how the ship's purser made them for mailing the newspapers, as well. I know this, because I MADE ONE for the stamp shop owner I worked for back in the 1980's, so she would have an example to put in her Scott Germany album!