Collecting German Empire stamps is very popular worldwide.  The empire also provides us with a multitude of different ephemeral items of that era, with some of them being even more interesting and occasionally more valuable as the stamps and covers themselves.

What exactly is the philatelic definition of "ephemera"?  Philatelic ephemera refers to paper documents that compliment a stamp collection or stamp exhibit.  These documents can be posters, poster stamps, philatelic labels (Cinderellas), historical documents, picture postcards, admission tickets, etc., which can be used to enhance and beautify a stamp collection.  If the philatelist doesn't mind having a few "lumpy" album pages, these ephemera items can even include contemporary coins, currency, medals, etc.

These ephemeral items, when used to illuminate famous people of the era in which stamps were issued, can even be royal decrees!

For the philatelist specializing in German imperial stamps and postal history, the epitome of historical ephemera would be to have a royal document with the signature of the first German emperor, Kaiser Wilhelm I.

The document shown below was issued by Kaiser Wilhelm I, in his role as the King of Prussia.  The Kaiser actually had many royal titles.  In addition to being the German emperor, he was also:

This German Empire document has been hanging on my office wall for years.  I knew who issued it, but I could not tell what it was issued for.  As with all royal decrees, this document is unique.  That is to say that there are no identical examples anywhere with which a comparison could be made.

In the end, I HAD TO translate it.  Deciphering the 19th Century German script was extremely difficult.  But with a lot of intense study, I was finally able to translate most of the words into modern printed German.

In actuality, it is a "judicial appointment" from the German Empire Kingdom of Prussia. 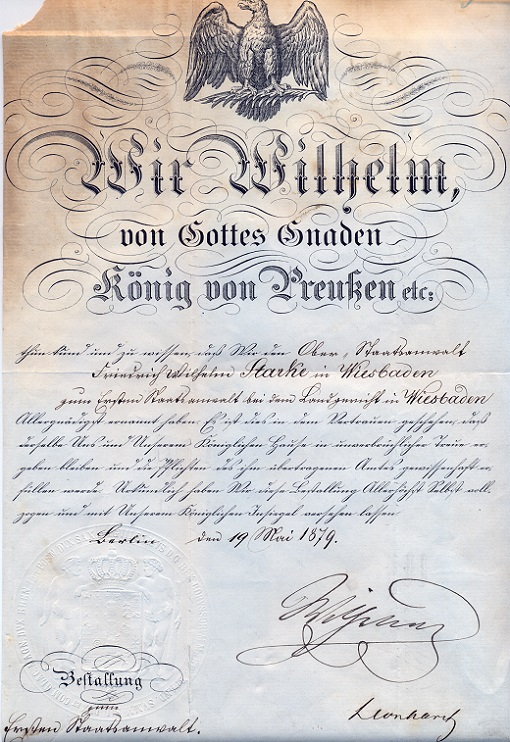 We Wilhelm
By the Grace of God
King of Prussia etc.

... know this that We order that Attorney General Friedrich Wilhelm Starke in Wiesbaden will be the First Prosecutor at the District Court in Wiesbaden having graciously earned our trust ... this supreme royal order will be in force ...

At the lower left is impressed the royal seal of the King of Prussia.  At the bottom left is the word "Bestellung" or "order / appointment", with the title "First Prosecutor" written underneath it in script.

At the lower right is the signature of Kaiser Wilhelm I.  Below it is another signature, probably a secretary or aide to the emperor, and probably the actual author of the document.

As with most royal decrees, they are written by an aide, then  are presented to the monarch, who generally just glances over and then signs the decree.

Return to German Empire from Ephemera -
A Royal Appointment