The German Empire established post offices in foreign countries to provide mail service where the local services were deemed unsafe or unreliable.  They were usually set up in cities which had some sort of German political or commercial interest.

The post offices in China began operation in 1886. Initially, contemporary German Empire definitive postage stamps were used. These are called "forerunners". Many of these are not expensive, and collecting these forerunner issues is very popular with German postmark collectors.

Here are some town cancel examples.

Stamps canceled with "Tsintau" or "Tsingtau" were used in the German colony of Kiauchau (Kiautschou).  One is shown in the image directly above. 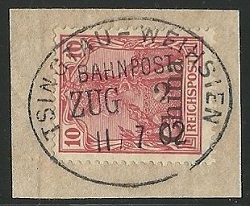 Of course, each of the trains for a particular railroad route had it's own number, which appeared in the cancel.  In the example above, it is "Zug 2" or "Train 2".  Each of the major railway postmarks has multiple train numbers, which can vary in value, according to their scarcity.

There are multiple variations in the hand cancels for each of the major maritime cancel types noted in the table.  There are actually six different types of the Shanghai-Tientsin postmark shown directly above.

In the same book, following the Feldpost section, there are another two pages of "ship" postmarks.

One could truly spend a lifetime, just collecting the postmarks of the German Empire - Post Offices in China.  True, some of the postmarks are very expensive, but if you know where to look, there are great bargains to be found in the philatelic marketplace.

I haven't spent much time or money on German Empire - Post Offices in China postmarks at all!  The Seepost postmark shown above catalogs €60 ... and I believe I originally found it in a stamp circuit book for less than US $1.00.  The most costly item on this page, as of the time of writing this article, is the partial envelope with the railway cancel, which is shown above.  I bought it from a Germany eBay site seller for €11, against a catalog value of €35.

For anyone collecting or specializing in the postmarks of the German Offices in China, you MUST HAVE the following specialized catalog.

Return to German Empire from
Offices in China - Postmarks