The Generalgouvernment was the German name for the puppet state that was formed from the central part of the former nation of Poland during World War II.

The brutal German occupation of Poland from 1939 to 1945, along with unprecedented atrocities the Polish people were subjected to by the Nazis, was one of the most horrific periods of 20th Century history.

Though Poland has existed, off and on, as a nation since the 10th Century, it's history has been one filled with turbulence and uncertainty. 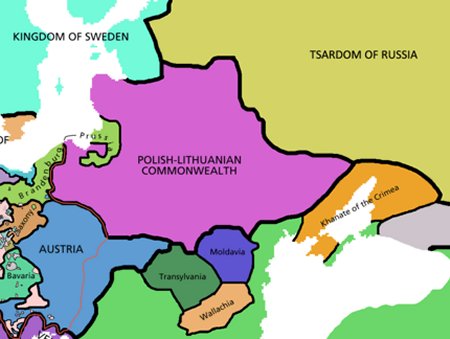 The geographic area that comprises present-day Poland has been inhabited for almost 3,000 years, but it was the Duke of the Polans, Mieszko I (962-992), who is considered the creator of the Polish state in 966. Later, in 1025, the Kingdom of Poland was established under the rule of Boleslaw I the Brave (967-1025). The Kingdom continued to exist for about 545 more years.

In 1569, the Kingdom of Poland entered into an alliance with the Grand Duchy of Lithuania, and the Polish-Lithuanian Commonwealth was established, lasting until 1795. The Commonwealth, in about 1638, is shown in the map above. As one can see, this nation dwarfed any other state of Europe in size at the time, except for Russia. 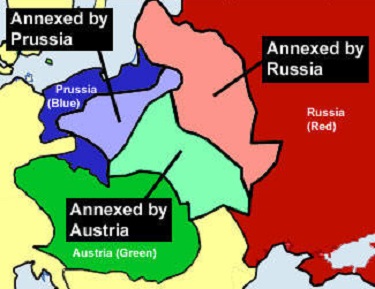 Partitioning of the Polish-Lithuanian Commonwealth

The Polish-Lithuanian Commonwealth ceased to exist as a political entity in 1795, when its territory was confiscated and partitioned between the Kingdom of Prussia, the Russian Empire, and the Austrian Empire. The map above illustrates the three partitions. Poland would not exist again for another 123 years, until after the end of World War I.

When adhesive postage stamps came into wide use in the 1850's, the postage stamp issues of the Kingdom of Prussia, the Russian Empire, and the Austrian Empire were used within the partitioned ethnic Polish areas of Northern and Eastern Europe. These postage stamps of the three partitioning empires, continued in use, until the end of World War I in 1918.

The two Austro-Hungarian stamps shown above feature Polish town cancels from the 1870's. The one on the left is from Ustrzyki Dolne, and the one on the right is from Krakow. 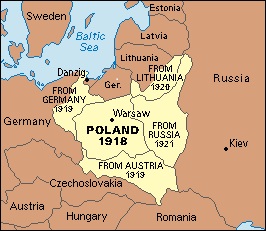 In November 1918, Poland was re-constituted as the Second Polish Republic. During the period from 1919-1921, Poland managed to fuse the territories of the former partitioning powers into a productive and prosperous nation state. Railways were re-structured, a new network of roads was built up, and a major seaport was opened on the Baltic Sea, to provide for Polish exports and imports and to circumvent the Polish state's having to use the German dominated port of Danzig.

In 1919, the Polish Republic issued their first postage stamps, and they continued to issue their own stamps until 1939. 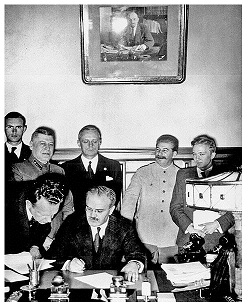 The "Treaty of Non-Aggression between Germany and the Soviet Union", also called the "Molotov–Ribbentrop Pact", was signed in Moscow on August 23, 1939. The photograph at the left depicts Vyacheslav Molotov signing the treaty. Joachim von Ribbentrop and Josef Stalin are seated against the wall directly behind him.

Under the treaty, each pledged to remain neutral, in the event that either nation was attacked by a third party. The treaty had a hidden agenda though. It also included provisions for the division of Northern and Eastern Europe into German and Soviet spheres of influence, anticipating "territorial and political rearrangements" of those countries.

Once again, Poland was about to "disappear"! 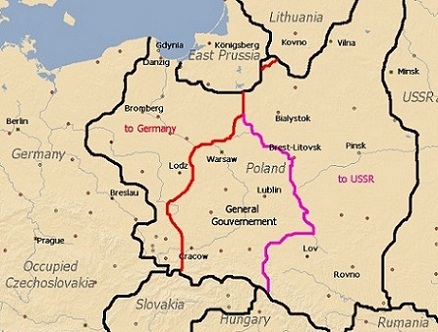 Annexation of Poland and the Generalgouvernment in 1939

On September 1, 1939, Germany attacked Poland from the West. Within a few days of the invasion, German military forces began conducting massacres of Polish and Jewish civilians and prisoners of war. The Luftwaffe also took part by strafing fleeing civilian refugees on roads. On September 17, 1939, the Soviet Union attacked Poland from the East. Within about a week, the country had been completely overrun by German and Soviet military forces, and on September 28, 1939, the Polish government in Warsaw surrendered.

The map above illustrates the pre-war borders of Poland in black lines. The Eastern sections of Poland, were annexed by the Soviets and became part of the Union of Soviet Socialist Republics. The primarily ethnic German Northern and Western sections of Poland were annexed by and became part of the Third Reich. The core central and Southern parts of the former Republic of Poland, in between the pink and red lines, became the "Generalgouvernment" under German occupation.

Generalgouvernment, the German name used on the German occupation stamps of Poland from 1939 to 1945, was actually the Generalgouvernement für die besetzten polnischen Gebiete, or in English, the General Government for the Occupied Polish Territories. The Generalgouvernment was established by Adolph Hitler's decree of October 12, 1939, with its capital at Krakow. Hans Frank was appointed as the Governor-General. Frank oversaw the segregation of the Jews into ghettos and the use of Polish civilians as forced and compulsory labor in German war industries. Over one million Poles were deported to Germany as slave laborers during the war.

In March 1941, Hans Frank informed his subordinates that Hitler had made the decision to "turn this region into a purely German area within 15 to 20 years". He explained that "Where 12 million Poles now live will be populated by 4 to 5 million Germans. The Generalgouvernement must become as German as the Rhineland." During the German occupation, over a third of the 1939 population of the Generalgouvernment had perished by the time Soviet forces liberated the territory in late 1944.

In 1942, the Germans began the systematic extermination of the Jewish population. Six extermination camps (Auschwitz, Belzec, Chełmno, Majdanek, Sobibór and Treblinka) were established in which the mass murder of millions of Jews from the Generalgouvernment and other countries was carried out between 1942 and 1944. Of Poland's pre-war Jewish population of an estimated 3 million, only about 50,000 survived the war. 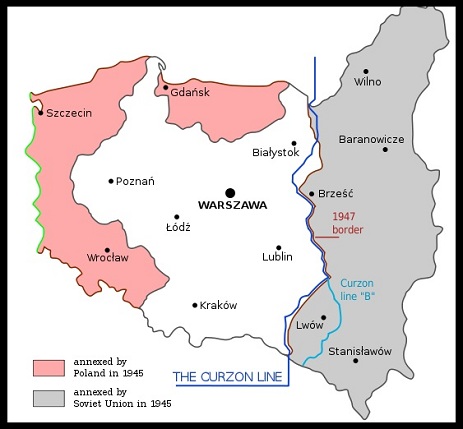 The Generalgouvernment collapsed in 1944, and all of Poland was liberated in 1945. Subsequently, a Soviet-style Communist People's' Republic was established in Warsaw.

In the 1980's, the Communist government was severely weakened by the labor movement. During the Revolutions of 1989, free elections were held, and a labor union candidate, Lech Walesa, became the president of the new Third Republic of Poland in 1990. This achievement in Poland succeeded in heralding the collapse of Communism across Europe and eventually in the Soviet Union itself.

Today, Poland is a secure democratic nation with a thriving economy and a very bright future. Present day Poland is a member of the European Union, NATO, the United Nations, and the World Trade Organization.