The Generalgouvernment of Poland issued their first definitive postage stamps between August and September of 1940.  They are all pictured above (Mi. 40-51, Sc. #N56 // N72).

This set of twelve definitive postage stamps depict sights in Krakow, Lublin, and Warsaw.  They are as follows:

The four charity stamps shown above (Mi. #52-55, Sc. #NB1-4), issued August 17, 1940, utilize the same designs as the definitive postage stamps issued previously, however, they are all printed in the same color, with that being olive gray.

The surtax amount went to the Red Cross, for the aid of wounded German soldiers.

The set of stamps shown above (Mi. #56-58, Sc. #NB5-7) was issued on October 26, 1940 to celebrate the First Anniversary of the Generalgouvernment of  Poland.  The three stamps depict a German Peasant Girl in Poland, a German woman wearing a scarf, and a German Peasant.

An early omen of things to come .... of the NAZI intent to replace the Polish Slavic population with that of an ethnic German population. 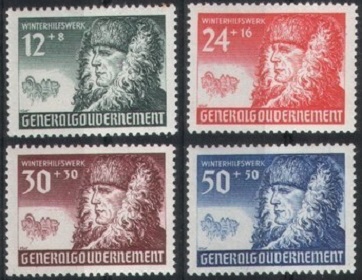 As shown, they depict Flrorian's Gate in Krakow, Krakow Castle and City in the 15th Century, and the Tyniec Monastery on the Vistula River. 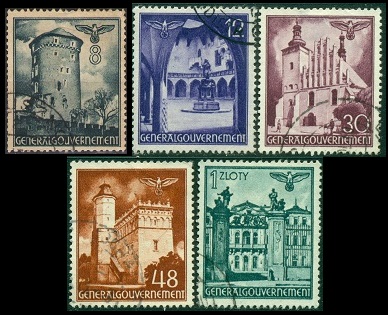 The 8 G., 12 G., 30 G., and 1 Z. denominations are identical to the designs of the pictorial definitives issued in August 1940, but they are printed in different colors than those of the original issues.

The 48 G. denomination was an added denomination to the current definitive stamps, and it depicts the City Hall in Sandomierz. 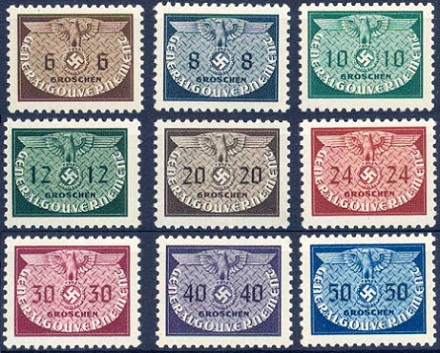 They are identical to the previous Official Stamp issues, with the exception that these issues are much smaller in size, being 21 1/4 x 16 1/4 mm, as opposed to the 31 x 23 mm size of the original issues.