A poll was held in September 1950 in Wurttemberg-Hohenzollern, Wurttemberg-Baden, and Baden, regarding a merger of the three states. A public referendum was held on December 16, 1951, and on April 25, 1952, all three states were merged into the modern German state of Baden-Wurttemberg. 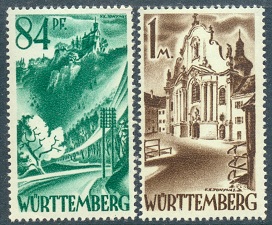 The new French zone state of Wurttemberg-Hohenzollern, notated as just "Wurttemberg" on its postage stamps, issued their first definitive postage stamps between June 1947 and February 1948. The stamps were photogravure and printed on unwatermarked papers of varying quality.

The new definitive set, shown above (Mi. #1-13, Sc. #8N1-13), featured six designs, which are: Friedrich von Schiller, the Castle of Bebenhausen, Friedrich Holderlin, the Town Gate of Wangen, Lichtenstein Castle, and Zwiefalten Church. The first four designs were repeated in varying denominations and colors within the set, as indicated in the images above. 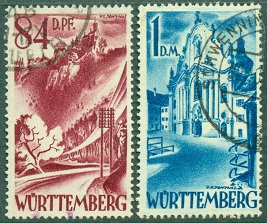 Due to the post-war economic crisis in the German occupation zones, the Western Allies instituted currency reform during June 1948. The old Reichsmark currency was replaced by a new Deutsche Mark currency, and this would eventually become the official currency of the soon-to-be Federal Republic of Germany (West Germany) until 2002, when it would be replaced by the Euro.

The 1947 stamp designs were re-issued between June and August of 1948 to coincide with the currency reform. The same 1947 designs were used, though the new stamps had changes in color and in some of the denominations. Two new designs were added to the 1948 set, with those being depictions of Waldsee and Ludwig Uhland. They are all shown in the images above (Mi. #14--27, Sc. #8N14-27). 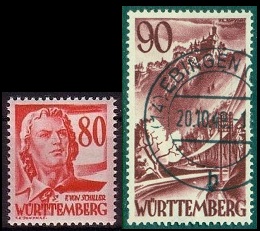 Many of the denominations of the three definitive sets shown on this page exist imperforate. They are all valued at about $37.50 each.


Anyone considering specializing in these should get a copy of the Michel Deutschland-Spezial Katalog Volume II. The specialization possibilities are tremendous. All of these stamps come in various papers, in multiple types, and there are also many plate and printing errors throughout this series.