Practically all of the French zone stamps for the state of Rheinland-Pfalz that were issued during 1949 were either commemorative postage stamps or commemorative semi-postal (charity) stamps. 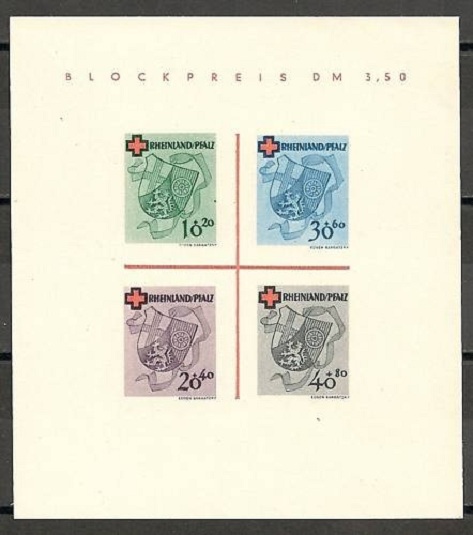 Each of the stamps depicts the coat of arms of the state of Rheinland-Pfalz with a red cross above it. The souvenir sheets were issued imperforate and without gum.

The set of stamps shown in the image above (Mi. #46-48, Sc. 6NB7-9) were issued on August 12, 1949 to commemorate the 200th Anniversary of the Birth of Johann Wolfgang von Goethe. The three stamps depict various portraits of Goethe.

The two stamps in the image above (Mi. 51-52, Sc. #6N41-42) were issued on October 4 to commemorate the 75th Anniversary of the Universal Postal Union. Both stamps depict a posthorn and a World globe.


Anyone considering specializing in the stamps of Rheinland-Pfalz should get a copy of the Michel Deutschland-Spezial Katalog Volume II. As is the case with the definitive stamps of 1947-1948, the specialization possibilities are tremendous. All of these commemorative stamps come in multiple types. In looking through the catalog, I noted that German stamp anniversary stamps above come in nine different types each. There are also many plate and printing errors in this series.


At the beginning of October 1949, the state of Rheinland-Pfalz joined the newly established Federal Republic of Germany, and their separate stamp issues were replaced by those of the new West German republic.