The French zone state of Rheinland-Pfalz, or Rhineland-Palatinate in English, was established on August 30, 1946. It was formed from the Northern part of the French Occupation Zone, which included parts of Bavaria (the Rhenish Palatinate), the Southern parts of the Prussian Rhine Province, and parts of Hesse-Darmstadt. The new state was confirmed by referendum on May 18, 1947, and its capital was established at Mainz. 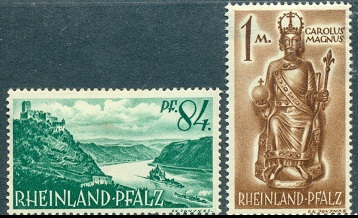 The new state of Rheinland-Pfalz issued their first definitive postage stamps shown above (Mi. #1-15, Sc. #6N1-15) between May 1947 and February 1948. The stamps were photogravure and printed on unwatermarked papers of varying quality.

The new definitive set featured twelve designs, which are: Ludwig von Beethoven, Wilhelm von Ketteler, a girl carrying grapes, Porta Nigra at Trier, Karl Marx, Devil's Table near Pirmasens, a street corner in St. Martin, the Cathedral of Worms, the Cathedral of Mainz, a statue of Johann Gutenberg, Gutenfels and Pfalzgrafenstein Castles on the Rhine, and a statue of Charles the Great (Charlemagne). 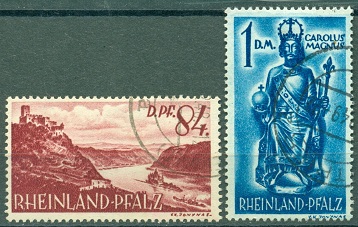 Due to the post-war economic crisis in the Allied occupation zones, the Western Allies instituted currency reform during June 1948. The old Reichsmark currency was replaced by a new Deutsche Mark currency, and this would eventually become the official currency of the soon-to-be Federal Republic of Germany (West Germany) until 2002, when it would be replaced by the Euro. 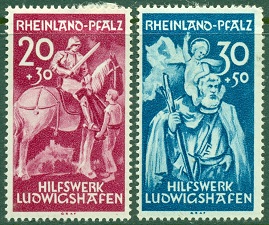 The two stamps shown above (Mi. #30-31, Sc. #6NB1-2) were issued on October 18, 1948, with the surtax providing aid for the inhabitants of Ludwigshafen. The stamps picture St. Martin and St. Christopher.

During the early part of the 20th Century, Ludwigshafen became a chemical research and manufacturing center -- the headquarters of BASF are located there. The city was completely devastated, as a result of World War II. After the war, the city received a considerable amount of Allied aid, and particularly, American aid. In 1948, the "Pasadena Shares Committee" sent packages of blankets, clothing, food, and medicines to help the residents. Many friendships started to form, and in 1956, Ludwigshafen and Pasadena, California became "sister cities", which they still are today!

Between November 1948 and July 1949, more definitive stamps were issued for the French zone state of Rheinland-Pfalz, featuring some denomination and color changes. All of them are shown above (Mi. #32-41, Sc. #6N30-38). These new definitives do not have the denomination name, "Pf." or "D.Pf.", on them.


Anyone considering specializing in these should get a copy of the Michel Deutschland-Spezial Katalog Volume II. The specialization possibilities are tremendous. All of these stamps come in various papers, in multiple types, and there are many plate and printing errors in this series.