The French zone of occupation was not initially allocated by the victorious Allies following the end of World War II. This was done in consideration of the historical animosity between the French and Germans.

With the urging of Charles de Gaulle, leader of the Free French Forces, and in appreciation of the important role the French underground played in the defeat of Germany, the British and American forces ceded small portions of their occupation zones to France. This resulted in the French occupation zone, consisting of two non-contiguous areas along the German border with France. The capitol of the French Military Government was in Baden-Baden. 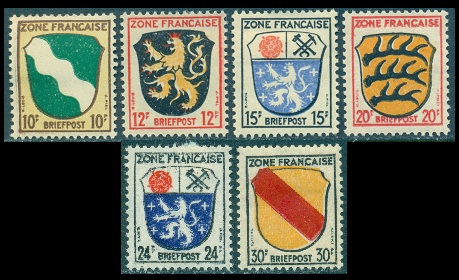 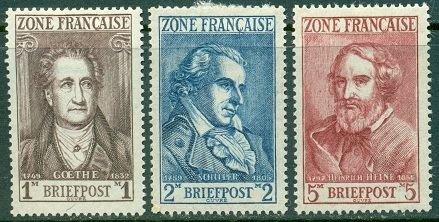 The thirteen stamps in the images above (Mi. 1-13, Sc. #4N1-13) were issued between December 1945 and April 1946 for general usage throughout the French occupation zone. Though the stamps were denominated in German currency, they all have the "appearance" of similar contemporary French postage stamps of the era. These general issues were valid for postage until June 1948, though in 1947, each of the German states within the French occupation zone began issuing their own postage stamps.

The Pfennig denominations pictured the coats of arms of Rheinland, Pfalz, Wurttemberg, Baden, and the Saar Protectorate. They were typographed on unwatermarked paper and were perforated 14 x 13 1/2. With this type of production, there are many printing and color errors in this series.

The Pfennig values of this set were printed in sheets of 100, with a gutter between the two panes of 50 stamps, thus these can be collected in gutter pairs, as well.

Even though some of the stamps of this set show the Saar coat of arms, they were not intended for use there. Saar was an independent state, under French influence, and they issued their own postage stamps, which were denominated in Francs. Stamps from this occupation general issue set with Saar cancellations have a substantial premium over those that were used elsewhere in the French zone.

Be careful when buying the 10 Pf. and the Mark denominations in used condition. Due to their high prices, faked and favor cancellations abound.