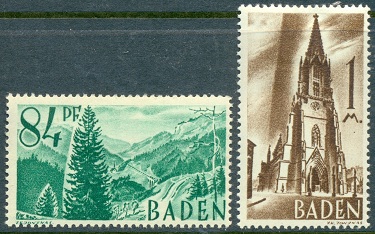 The thirteen new French zone stamps for the state of Baden, shown above (Mi. #1-13, Sc. #5N1-13), were issued in 1947. The stamps were photogravure and printed on unwatermarked papers of varying quality.

The new definitive set featured six designs, which are a portrait of Johann Peter Hebel, a girl of Constance, a portrait of Hans Baldung Grien, Rastatt Castle, a Black Forest scene, and the Cathedral of Freiburg. The first four designs were repeated in varying denominations and colors within the set, as indicated in the images above. 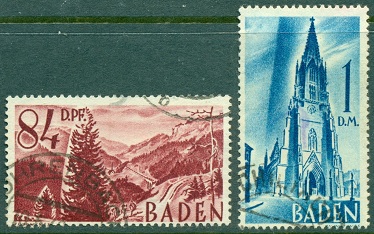 Due to the post-war economic crisis in the German occupation zones, the Western Allies instituted currency reform during June of 1948. The old Reichsmark currency was replaced by a new Deutsche Mark currency, and this would eventually become the official currency of the soon-to-be Federal Republic of Germany (West Germany) until 2002, when it would be replaced by the Euro. The 1947 stamp designs were re-issued between June and September of 1948 to coincide with the currency reform.

The same 1947 designs were used, though the new stamps had changes in color and denomination. Two new designs were added to the 1948 set, with those being a girl wearing a festival headdress and a portrait of Grand Duchess Stephanie. They are all shown in the images above (Mi. #14-27, Sc. #5N14-27).

Between November 1948 and May 1949, ten more definitive stamps were issued featuring some denomination and color changes. All of them are shown above (Mi. 28-37, Sc. #5N28-40), except for the 40 Pf. Brown with a view of Rastatt Castle. These new definitives do not have the denomination name, "Pf." or "D.Pf." on them.

This completes the review of the definitive issues for the French zone state of Baden.

Anyone considering specializing in these should get a copy of the Michel Deutschland-Spezial Katalog Volume II. The specialization possibilities are tremendous. All of these stamps come in various papers, in multiple types, and there are many plate and printing errors in this series.