The definitive French stamps of late 1944 through early 1945 showcase France's liberation from fascism and the creation of a new republic, based on their historical ideals of Liberty, Equality, and Fraternity. 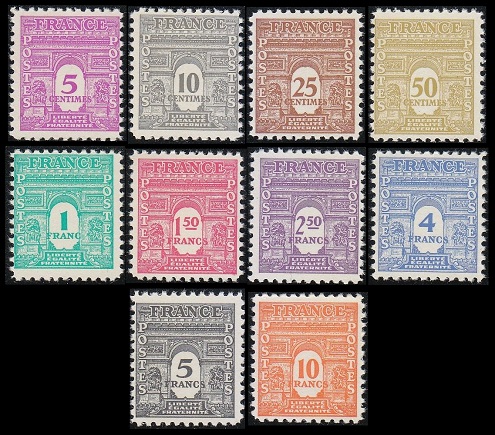 They were printed in the United States by the Bureau of Engraving and Printing, for use by the Allied military government in the liberated areas of  France.  The Allied powers later recognized the authority of General de Gaulle's provisional government in the liberated areas, and the stamps were transferred to the Free French in July 1944.  They were officially issued, in Paris, on October 9, 1944.

The very appropriate common design, for these liberation-themed stamps, features the Arc de Triomphe in Paris.  Construction began in 1806, on the orders of Emperor Napoleon I, and the arch was completed in 1836.  The arch was built as a memorial to those that fought and died for France during the French Revolution and during the Napoleonic Wars.  The outsides of the arch are decorated with allegorical images, and the vault is inscribed with the names of French military leaders and their victories.  Beneath the vault is the Tomb of the Unknown Soldier from World War I. 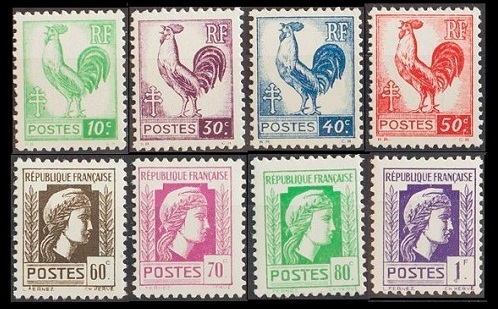 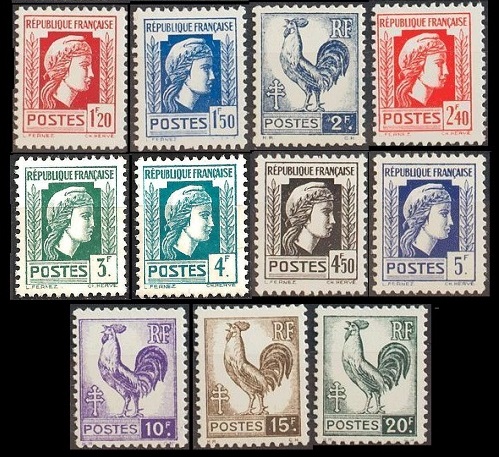 These new stamps were first issued in Corsica, after the Allied landing there.  They were officially issued, in Paris, on November 15, 1944.

The two common designs feature the Gallic Cock and Marianne, with both being popular representations of France and the French republic.

The maiden Marianne, who is the principal subject of most of the modern French definitive stamps, as the personification of "liberty and reason", is the national symbol of the "French Republic".  Her depiction is similar to that of the "goddess Liberty", which is used on the definitive postage stamps (and coins) of many of the other countries of the World.

This particular drawing of Marianne is called Marianne of Algiers.  It was designed by the French artist, Louis Fernez (1900-1984), and it features Marianne wearing a Phrygian Cap, with the portrait being framed by olive branches at the sides.  The design was chosen in November 1943 by the French Committee of National Liberation in Algiers, and it was first used on the definitive stamps of Algeria issued during 1944.


Similar types of "RF" overprints, with some utilizing additional text and / or the Cross of Lorraine, were produced locally by fifteen cities during the time of the liberation.  These are not listed in the Scott catalogs.  Specialized listings of these locally applied overprints will be found in the Yvert & Tellier Timbres de France Tome I specialized catalog in the section entitled "Timbres de la Liberation". 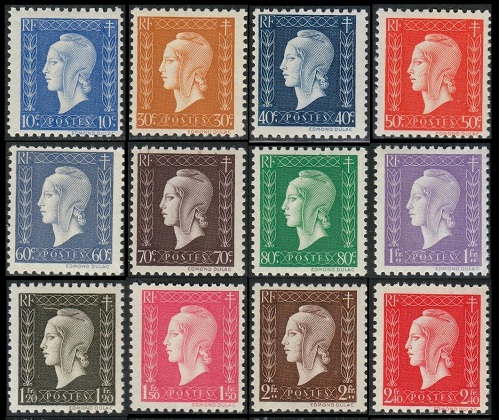 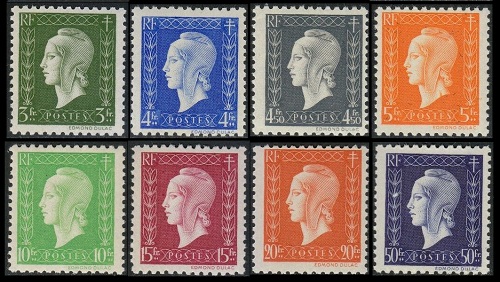 The common design of these stamps, which incorporates "RF" and the "Cross of Lorraine", is known as the Marianne de Dulac Series of London.  The stamps were printed by De La Rue of London, on orders from the Free French Government of General Charles de Gaulle.  They were designed and engraved by the French illustrator, Edmond Dulac (1882-1953), who had immigrated to Great Britain in 1905.

These were the first definitive postage stamps to be officially issued during the new French Fourth Republic. 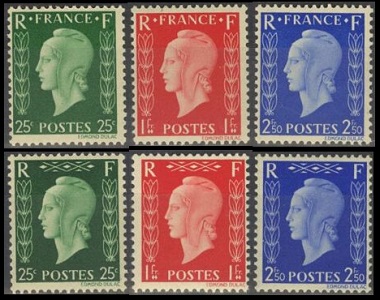 The six Marianne de Dulac definitive French stamps shown above were printed in England by Harrison & Sons during 1942, on orders from the Free French Government of General Charles de Gaulle, but they were never issued.  The stamps are photogravure and perforated 15 x 14.

The 2018 Scott catalog does show examples of these un-issued stamps in a footnote, but they are not assigned catalog numbers.  According to the Scott catalog, the set inscribed  "RF" and "France" is the more expensive of the two sets. 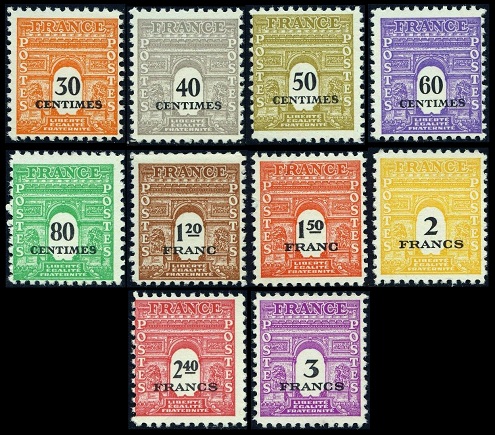 These designs are identical to those of the Arc de Triomphe definitive stamps issued in October 1944, but the denominations of these new stamps are printed in black.