The post-liberation surtaxed or "semi-postal" French stamps issued between the end of 1944 and the end of 1945 were intended to raise money for reconstruction efforts and for the civilian victims of the war, as well as other public charities.

According to the Yvert-Tellier specialized catalog, many of these charity stamps were issued for the benefit of the "Entraide Française" or the "French Mutual Aid [Society]".  This was a public charity whose purpose was to provide assistance to the sick, the disabled, and the needy.  Following a bit of further research, it seems that one of their key focuses was the plight of French Jewish families (especially the children) that had either been displaced or deported by the Germans during the war. 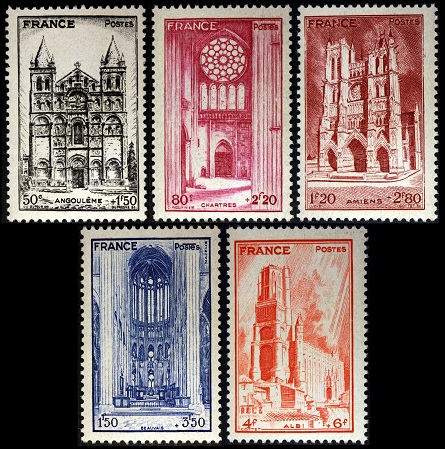 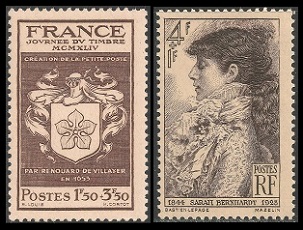 The design features the Coat of Arms of Renouard de Villayer.

Renouard de Villayer (1607-1691) was a member of the Counsel of State during the reign of King Louis IV.  In 1653, as the director of the Paris City Post, he ordered that post boxes be placed throughout the city.  Letters, prepaid with uniform postage, could be deposited in the post boxes, and they would be delivered within the city on the same day.


The surtaxed pictorial French stamp shown above, at the right (Y&T #738, Sc. #B191), was issued on May 16, 1945 to commemorate the 100th Anniversary of the Birth of Sarah Bernhardt, the world renowned French actress.  The surtax benefited the Coquelin Foundation for actors.

The stamp features the detail from an 1879 painting of Sarah Bernhardt by Jules Bastien-Lepage (1848-1884).

Henriette-Rosine Bernard called Sarah Bernhardt (1844-1923) was a French stage actress from 1862 through 1922.  She starred in some of the most popular French plays of the time, including those written by Alexandre Dumas and Victor Hugo.  Sarah Bernhardt made several theatrical tours around the world, and she was one of the first prominent actresses to make sound recordings and to act in motion pictures.

The design features a portrait of King Louis XI and a Post Rider. 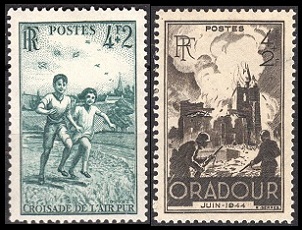 
The surtaxed pictorial French stamp shown above, at the right (Y&T #742, Sc. #B195), was issued on October 13, 1945, in memory of the Destruction of Oradour-sur-Glane in June 1944.  The surtax benefited the Entraide Française.

The design shows the Burning of Oradour Church.

On June 10, 1944, the village of Oradour-sur-Glane in Nazi occupied France was destroyed, its church was burned, and 642 of its inhabitants, including women and children, were massacred by soldiers of the German 2nd SS Panzer Division. 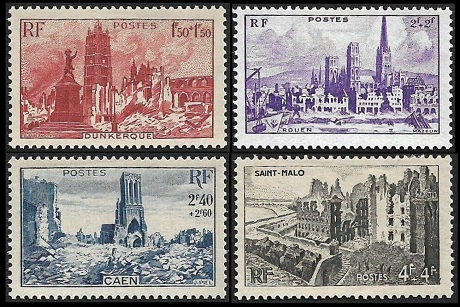 The four surtaxed pictorial French stamps shown above (Y&T #744-747, Sc. #B197-B200), were issued on November 5, 1945.  The surtax benefited the Entraide Française, in particular, the suffering residents of the four cities depicted in the stamps shown above.

The four designs, in the order that they appear above, depict the post-war ruins of the following:

The surtaxed pictorial French stamp shown above (Y&T #736, Sc. #B193), was issued on May 16, 1945 to publicize the Fight Against Tuberculosis.  The surtax benefited Tuberculosis Victims.

The design features a view of a Tuberculosis patient.