The commemorative and special-purpose French stamps issued by the the Vichy State of France and the provisional Republic of France, between 1941 and the end of 1944, showcased important people, places, and historical treasures of French history.  This period would conclude with one of the greatest historical events of 20th Century, the massive Allied invasion of Western Europe that would soon bring World War II to an end. 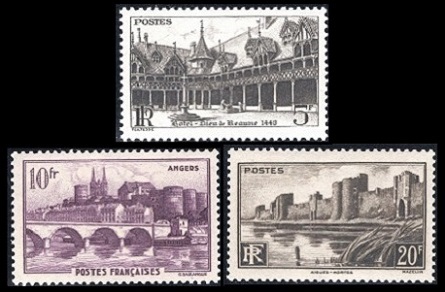 Their designs, in the order that they appear above, are as follows: 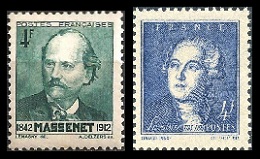 Jules Emile Frederic Massenet (1842-1912) was a French composer of the Romantic Era, best known for his operas, though he composed many other types of music as well.

Antoine-Laurent de Lavoisier (1743-1794) was a French nobleman and chemist, and he is widely considered as "the father of modern chemistry".  He helped to construct the "metric system", and he wrote the first extensive list of "elements".  He is responsible for recognizing and naming the elements "oxygen", "hydrogen", and "sulfur".  Being an influential nobleman though, he was tried and guillotined in the aftermath of the French Revolution.

Marie-Henri Beyle called Stendhal (1783-1843) was a French writer.  He is considered one of the earliest and foremost practitioners of Realism Movement in writing.

Andre-Eugene Blondel (1863-1938) was a French engineer and physicist.  He is the inventor of the oscilloscope, and his work paved the way to a greater understanding of the behavior of alternating current.

Arras, in what was once part of the Spanish Netherlands, is the capital of the Pas-de-Calais Department of France.  Arras was basically leveled by German shelling during World War I, completely destroying the town's historical center, with its famous Baroque Town Hall and Belfry.  The historical center of town was painstakingly re-constructed brick-by-brick by local citizens between 1924 and 1932, and today, the old town square, the Town Hall, and the Belfry are the principle tourist attractions there.

The design features a panoramic view of Lac Lérié and La Maije (13,071 ft.) in the Dauphiné Alps of southeastern France.  The area, in the present-day Hautes-Alpes Department of France, is a popular vacation destination for hiking in the Summer and Skiing during the Winter.

The design features contemporary paintings of Nicolas Rolin (1376-1462) and Guigone de Salins (1403-1470) by the Dutch painter, Rogier van der Weyden (1400-1464).  With both of them being members of the Burgundian nobility, they were the husband-and-wife-team that founded the Hospices de Beaune in 1443.

The design features a view of the Chateau de Chenonceaux.  The Gothic chateau, dating back to the early 16th Century, spans the Cher River in the Loire Valley.

Thomas Robert Bugeaud, Marquis de la Piconnerie, Duc d'Isly (1784-1849) became a Marshal of France and the Governor General of Algeria.  He commanded French forces during the Napoleonic Wars and in the Franco-Moroccan War at the Battle of Isly.

The design features an allegorical representation of "liberation" (Marianne riding Pegasus) along with French Resistance combatants.

Return to French Stamps from
Commemoratives of 1941-1945

Frederic Mistral (1830-1914) was a French poet, writer, and lexicographer in the Occitan language.  Occitan is a romance language that is spoken in Southern France, Italy's Occitan Valleys, Spain's Val d'Aran, and in Monaco.

Edouard Branly (1844-1940) was a French inventor and physicist, who was an early pioneer in wireless telegraphy.

Claude Chappe (1763-1805) was a French inventor.  In 1792, Chappe demonstrated the first practical telecommunications system of the industrial age, utilizing his wireless semaphore telegraph system.  This system remained in use until the 1850's, when it was replaced by electric telegraph systems.

The design features tombs of the French kings in the crypt of the Basilica.

Saint-Denis is a Medieval basilica located near Paris.  The basilica is a place of pilgrimage and the burial place of almost all of the French kings, from the 10th through the 18th Centuries.