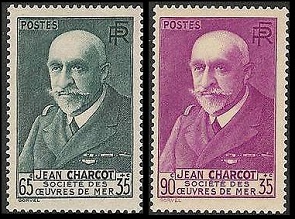 The common design of these two stamps features a portrait of Jean-Baptiste Charcot (1867-1936), a French scientist, physician, and polar explorer.

The 1.75 Fr. + 75 C. denomination pictorial French stamp shown above, at the left (Y&T #379, Sc. #B70), was issued on May 9, 1938 to publicize the National Exposition of Painting and Sculpture at Versailles.  The surtax benefited the Versailles Concert Society.

The design features a view of the Palace of Versailles.


The 1.75 Fr. + 50 C. denomination commemorative stamp shown above, at the right (Y&T #402, Sc. #B76), was issued on September 1, 1938 to commemorate the 40th Anniversary of the Discovery of Radium.   The surtax benefited the International Union for the Control of Cancer. 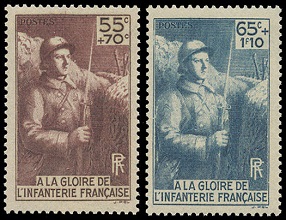 The design features the victory parade passing the Arc de Triomphe in Paris.

The design features a blind man listening to a radio.

The design features a civilian facing a firing squad.

The design features a nurse.

The 70 C. + 50 C. denomination pictorial French stamp shown above, at the left (Y&T #423, Sc. #B82), was issued on April 3, 1939 to honor the Army Engineering Corps.  The surtax was for the erection of a monument dedicated to the Army Engineers that Died in World War I.


The 90 C. + 35 C. denomination pictorial stamp shown above, at the right (Y&T #424, Sc. #B83), was issued on April 8, 1939 to celebrate the Opening of the new headquarters building for the French Ministry of Post, Telegraph, and Telephone.  The surtax was used for aid to orphans of employees of the P.T.T.

The design features a mother and child.

Reims Cathedral, one of the most important historical and cultural landmarks in France, was severely damaged by German shelling and subsequent fires during World War I.

The reconstruction took from 1919 to 1938, during which time the Cathedral was closed to the public.  It was reopened on Sunday, July 10, 1938, though some restoration efforts are still in progress to this date.

Miraculously, the Cathedral of Reims was not damaged during World War II.

The design features an allegorical representation of "France Welcoming Her Sons".

The design features a student and a nurse.