The design features a ski-jumper.

The design features an allegorical representation of the exposition. 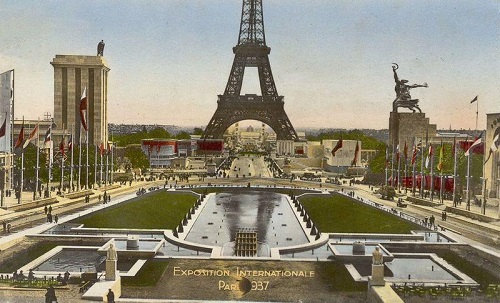 Many other festivals and anniversaries occurred during the time of the exposition, including the 100th Anniversary of the Arc de Triomphe on May 23, 1937. 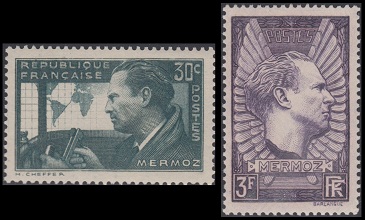 Jean Mermoz (1901-1936) was a French aviator and a pioneer in commercial aviation.  He is considered a hero to many in both France and Argentina, and there are flight schools named in his honor.

During an Argentine airmail flight on December 7, 1936, the Latécoère 300 Flying Boat being piloted by Mermoz crashed into the ocean.  Neither the aircraft nor the five members of the crew were ever recovered. 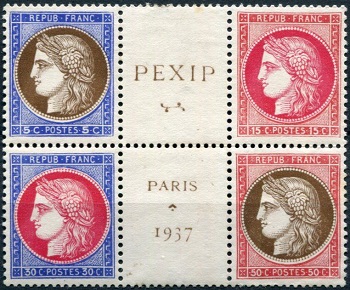 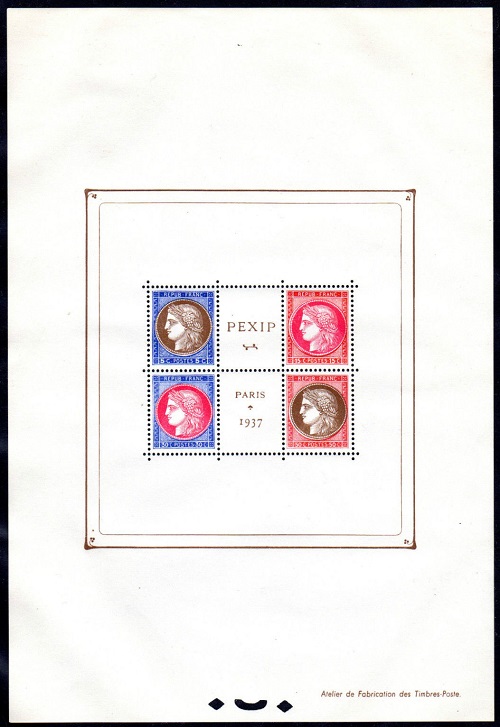 The block of four Ceres definitive stamps and two labels shown above, the center portion of the souvenir sheet shown at the left (Y&T #348-51 (Bloc #3), Sc. #329), were issued on June 18, 1937 for the Paris International Philatelic Exhibition (PEXIP).  The stamps in the souvenir sheet are typographed, and they are perforated 14 x 13 1/2.

The souvenir sheet also exists imperforate, and as such, it is rare.

The two commemorative French stamps shown above (Y&T #341-42, Sc. #330-31) were issued in June 1937 to celebrate the 300th Anniversary of the Publication of "Discours de la Méthode" by René Descartes.

The common design features the detail from a portrait of René Descartes by the Dutch painter, Frans Hals (1582-1666).

René Descartes (1596-1650) was a French philosopher, mathematician, and scientist, often called the father of modern western philosophy.  His book, "Discours de la Méthode" (English:  "Discourse on the Method"), originally entitled (English translation) "Discourse on the Method of Rightly Conducting One's Reason and of Seeking Truth in the Sciences", is a philosophical and autobiographical treatise.  The book is the source of the famous quotation "Je pense, donc je suis" (English:  "I think, therefore I am").

The design features an allegorical representation of France congratulating the USA.

Clément Ader (1841-1925) was a French inventor, engineer, and aircraft designer, credited by many with being the Father of Aviation and the Father of Powered Flight.  For further information about Clément Ader and his inventions, please see the "Airmail Stamps of 1936-1950" page in this website category.

Italy defeated Hungary in the final game of the 1938 World Cup Soccer Championship.

The design features a Seal of "Friendship and Peace", Victoria Tower (Westminster Palace) in London, and the Arc de Triomphe in Paris.

Return to French Stamps from
Commemoratives of 1937-1938

Pierre Corneille (1606-1684) is considered one of the greatest 17th Century French dramatists.  The comic-tragedy, "Le Cid", based on the legend of "El Cid", was first performed in Paris in January 1636.  The novel was published later that year.

Léon Gambetta (1838-1882) was a French statesman, prominent during the time of the Franco-Prussian War.

The design features a girl dressed in a costume of the Champagne Region, and of course, holding a glass of Champagne. 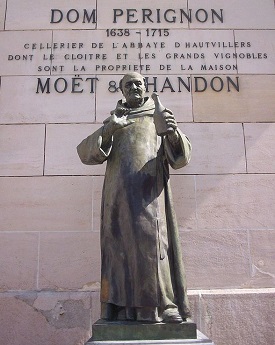 Dom Pierre Pérignon (1638-1715) was a French Benedictine Monk who made important contributions to the quality and production of wines in the Champagne Region of France.  Contrary to popular belief, he DID NOT invent "sparkling-wine" or the "Champagne making process".

The Moët & Chandon Winery named their, now famous, Champagne after him.  The first vintage of Dom Pérignon Champagne was in 1921.

Jean de la Fontaine (1621-1695) was a French fable writer and one of the most widely-read French poets of the 17th Century.