The commemorative French stamps issued, between 1933 and 1936, honored famous Frenchmen, celebrated the maiden voyage of a new French luxury liner, celebrated the anniversary of the French national anthem, and promoted the upcoming 1937 Paris International Exposition.

The three small-format portrait stamps shown above were issued on December 11, 1933 to honor Popular Frenchmen.  The stamps are typographed and perforated 14 x 13 1/2.

The common design of the two stamps features a portrait of Jacques Cartier, with his fleet in the background.

Jacques Cartier (1491-1557) was a French explorer and the first European to map the Gulf of St. Lawrence and the St. Lawrence River (1534-1542).  He claimed the territory along the St. Lawrence River for France, calling it "Canada", after the Iroquois Indian word "kanata", meaning "village" or "settlement", and he referred to the native inhabitants as "Canadians".  Cartier was also one of the first explorers to formally acknowledge that the New World was a separate land mass from Europe and Asia. 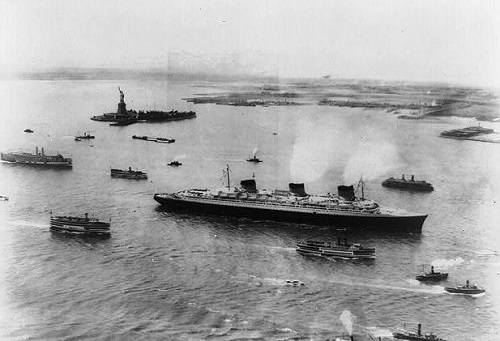 The 1.50 Fr. denomination French stamp shown above (Y&T #299, Sc. #300) was issued in April 1935 to publicize the Maiden Voyage of the Trans-Atlantic Steamship "Normandie".  The stamp is engraved and perforated 13.

The SS Normandie was built in Saint-Nazaire, and she made her maiden voyage to New York City in May 1935.  Until the "RMS Queen Mary" was launched in 1936, the "SS Normandie" was the fastest and most powerful ship afloat, having made the voyage to New York City in a little over four days.  During World War II, the Normandie was renamed to "USS Lafayette" and converted to a troop-ship.  In 1942, the ship caught fire and capsized at her pier in New York.  Salvage was later attempted, but she was finally scrapped in 1946.

Between 1935 and 1936, there were several printings of this stamp, resulting in four distinctly different (major) shades.  The common shade is shown above.  Certification is an absolute requirement for the other shades, as the color of this stamp can easily be chemically altered!  The Scott Catalog and Yvert-Tellier Catalog details are as follows:

The design features a portrait of Benjamin Delessert (1773-1847), the French banker and naturalist who founded the first savings bank in France in 1818.

The design of the stamp features a view of Metz Cathedral, a portrait of Rozier, and his balloon.

Jean-François Pilâtre de Rozier (1754-1785) was a French educator and one of the early pioneers in manned balloon flight.  On June 15, 1785, during an attempted crossing of the English Channel, his balloon deflated and fell near the Pas-de-Calais, making him the first known fatality in an air crash. 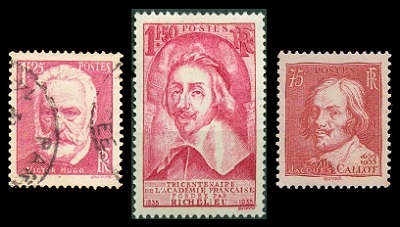 The design features a 17th Century painting of Armand-Jean du Plessis, Cardinal - Duke of Richelieu (1585-1642), the famous French clergyman and the chief advisor to King Louis XIII (1601-1643).  He was a patron of the arts, and in 1635, he founded the French Academy, the society responsible for matters concerning the French language.

The design features a 1629 portrait of Jacques Callot (1592-1635), a Baroque print-maker and draftsman from the Duchy of Lorraine.  During his lifetime, Callot made over 1,400 etchings, chronicling life during his era. 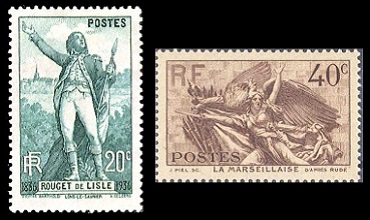 The two French stamps shown above (Y&T #314-15, Sc. #309-10) were issued on June 27, 1936 to commemorate the 100th Anniversary of the Death of Claude Joseph Rouget de Lisle, a person that may never have been known to history, if it weren't for a single song he authored.

The design of the 20 C. denomination stamp features the statue of Claude Joseph Rouget de Lisle, erected in 1882 in his birthplace, Lons-le-Saunier, France.

The design of the 40 C. denomination stamp features "Victory", from the La Marseillaise sculpture on the Arc de Triomphe in Paris.

Claude Joseph Rouget de Lisle (1760-1836) was a French army officer, during the time of the French Revolution.  During a public event in Strasbourg in 1792, he and some of his fellow officers were lamenting that France had no national anthem to rally around.  After the event, Rouget de Lisle went back to his quarters, and in a fit of patriotic excitement, he wrote the words and music to one of the most recognizable songs in modern World history.  He called the song "Chant de guerre pour l'armée du Rhin" (English: "Battle Hymn of the Army of the Rhine").  The new song would later be known as "La Marseillaise" (The French National Anthem)!

The Canadian War Memorial was erected on the site of the Battle of Vimy Ridge (April 1917) in memory of the 11,285 soldiers of the Canadian Expeditionary Forces that were killed (or missing-in-action) in France during World War I.

Jean Léon Jaurès (1859-1914) was a professor, journalist, member of parliament, and from 1902, the leader of the French Socialist Party.  While working to achieve a diplomatic solution to prevent the outbreak of World War I, Jaurès was assassinated on July 31, 1914. 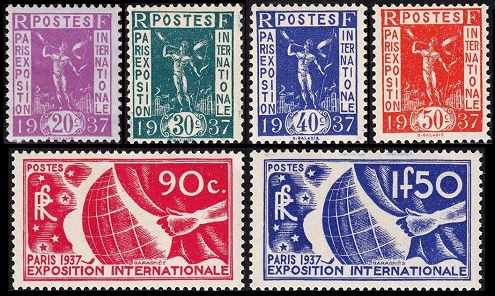 The six French publicity stamps shown above (Sc. #315-320, Y&T #322-327) were issued on September 15, 1936 to promote the upcoming Paris International Exposition of 1937.  As opposed to other French commemorative stamps of this time, which were usually engraved, these stamps were typographed.

The two designs feature a herald and an allegory of the exposition.

The 50 C. denomination, normally printed in red orange, also exists in a reddish carmine shade (Y&T #325A).  It is very rare.

The rally is thought to have been an organized demonstration citing the ongoing aggression of Germany and Italy against their neighbors.

The design features an allegory representing a "Vision of Peace".

Return to French Stamps from
Commemoratives of 1933-1936

The design features the Dove of Peace and an Olive Branch.

Joseph Marie Jacquard (1752-1834) was a French merchant, weaver, and inventor from Lyon.  In 1804, he invented the World's first programmable loom for weaving patterned silk.

The new programmable loom played an important role in the development of other machines, such as an early version of a programmable compiler, later used by IBM to develop the modern-day computer.

The design features a portrait of Ampère by Louis-Léopold Boilly (1761-1845).

André-Marie Ampère (1775-1836) was a French physicist and mathematician who founded the science of "Classical Electromagnetism".  The modern unit of measurement for electrical current, the ampere, is named after him.