Commemorative French stamps were not issued in vast quantities between 1927 and 1931, but this period did result in some wonderful philatellically inspired issues which are highly valued by collectors today. 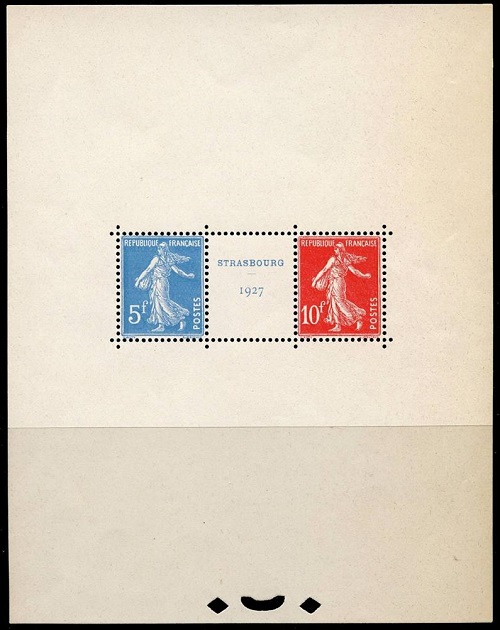 The central vignette depicts the "SS Paris" and Charles Lindbergh's plane "The Spirit of St. Louis".  At either side are busts of the Marquis de Lafayette, who became a Major General during the American Revolution, and of American General George Washington.

Berthelot was a scientist and chemist, and he is considered one of the greatest chemists of all time.

Jeanne d'Arc (1412-1431) was a French peasant girl, believed to have had a vision of the Archangel Gabriel.  The archangel instructed her to support King Charles VII and to fight to liberate France from English domination late in the Hundred Years War.  She gained prominence after victories in lifting the Siege of Orleans and in several other battles.  She was captured by the English on May 23, 1430.  She was later convicted of heresy by clerics sympathetic to the English cause, and on May 30, 1431, she was burned at the stake.

After her death, the Church heard a retrial of her case.  On July 7, 1456, she was found innocent of the crime of heresy.  She was canonized by Pope Benedict XV on May 16, 1920.  Since the Middle Ages, Joan of Arc has been considered a French national heroine, and today, she is one of the Patron Saints of France.

On May 18, 1929, the Merson-Type 2 F. definitive French stamps were overprinted EXPOSITTION / PHILATELIQUE / LE HAVRE / 1929, in blue, to promote the International Philatelic Exhibition at Le Havre during May 1929.  The stamps (Y&T #257A, Sc. #246) were only sold at the exhibition for 7 F., which included the price of the admission ticket.

The five commemorative French stamps shown above (Y&T #270-74, Sc. #258-62) were issued to publicize the International Colonial Exposition, held in Paris, France during six months of 1931.  The small format stamps were issued in 1930, and they all depict the head of a Fachi Woman from the colony of Niger.  The wide format stamp was issued in 1931, and it shows an allegorical representation of "French Colonials".

The purpose of the exhibition was to display the diverse cultures and immense resources of the French colonial empire.

Return to French Stamps from
Commemoratives of 1927-1931