The first airmail French stamps appeared in 1927.  It does seem a bit odd that the French, who were major pioneers of airmail service and of powered flight, would wait so long to implement postage stamps for airmail letters. 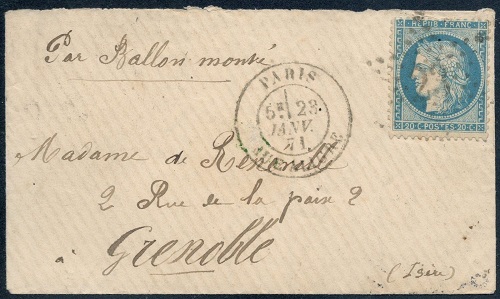 The French actually established airmail service in 1870, though this service involved hot air balloons, instead of airplanes.  The "Ballon Monte" (English: "Mounted Balloon") service was established during the Franco-Prussian War and the subsequent Siege of Paris from 1870-1871.  The effort was extensive and quite successful.  A flown balloon airmail cover from January 1871 is shown above.

These stamps were actually issued for the International Aviation Exhibition, in Marseilles, in June 1927, and they were only available at the exhibition.  Each admission ticket holder was allowed to purchase ONE set of these stamps.

As with any early 20th Century stamp having a simple overprint, forgeries do exist.  One should be very careful when purchasing sets of these stamps. 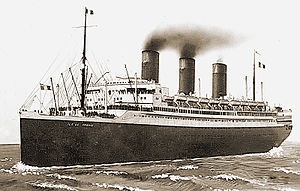 SS Ile de France in 1935
From an old picture postcard

In August 1928, the French Consul General in New York City had current French stamps overprinted and revalued to 10 Francs, to pay the catapult airmail postage for letters carried on the voyage of the French luxury liner "Ile de France" from the United States to France.

When the ship was one day away from the French coast, the letters were then flown to France by a catapult flight.

Needless to say, these two stamps are rare and tremendously expensive today.  They are rarely found for sale, and at that, they are usually only offered through major auction houses.

The two airmail stamps shown above (Y&T Aerienne #5-6, Sc. #C5-6)were issued in 1930.  These were the first stamps sold to the public, to be specifically used to pay postage on airmail letters.

The design shows a plane flying above Marseille, with the Church of Notre Dame at the left.

Some of these stamps were perforated "E.I.P.A.30" and sold at the International Airpost Exhibition, in Paris, from November 6 through November 20, 1930.  An example is shown above (Y&T #6c).

These perf-in stamps are scarce, and forgeries exist.  They should only be purchased with proper authentication.

The design shows Blériot's monoplane over the English Channel, between France and Great Britain.  Blériot's monoplane flew at a speed of 45 mph and an altitude of 250 feet!  The record-breaking flight from Calais to Dover took a little over 36 minutes!