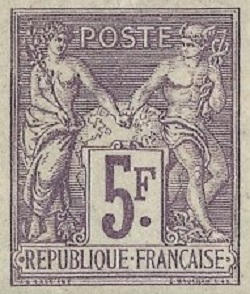 Definitive French stamps, featuring a brand new design, were issued between 1876 and 1900.

This new design, officially known as the Peace and Commerce Issue, features allegorical images of "Peace" and "Commerce" holding hands above a World globe.  In the center of the stamp is a white rectangle containing the value.  The inscriptions read "POSTE" at the top and "REPUBLIQUE FRANÇAISE" at the bottom.

French stamp collectors, however, prefer to refer to certain stamp issues by the designer's name, rather than the particular motif.  In the case of these stamps, the designer was Jules-Auguste Sage, whose name is located in the small imprint at the extreme lower left corner of the design.  Thus, philatelists today refer to these as the Type Sage Issues.

There are two major types of these French stamps, and they will be presented and described in the subheadings below.  Otherwise, the designs are all exactly the same, except for the denomination numerals and paper tints.

The thirteen type-Sage French stamps shown above were issued between 1877 and 1881.  These stamps are all Type 2.

The four type-Sage French stamps shown above were issued between 1884 and 1890.  These stamps are all Type 2.

The four type-Sage French stamps shown above were issued between 1898 and 1900.  These stamps are all Type 1.

Just about all the Type Sage French stamps issued from 1875 to 1900 exist imperforate and in gutter pairs.  The imperforates are expensive.  The gutter combinations are fairly common. 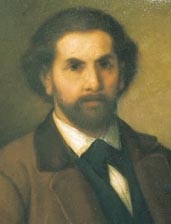 Jules-Auguste Sage was a poet, painter, and a member of the Society of French Artists.  He designed the Peace and Commerce stamps of 1876-1900.

The theme of the design is "commerce and peace uniting and reigning over the world".

As is usually the case, mint condition examples of them did make it into the philatelic marketplace.  In the 2017 Yvert & Tellier catalog, this stamp has a catalog value of €60,000.  They are rarely obtainable.  The example shown above sold in a 2016 Daniel Kelleher Auction for $23,000.