The new French stamps, issued during 1849 and 1850, featured the profile of the Roman goddess Ceres.

Ceres was the ancient Roman goddess of agriculture, fertility, and motherly love.  In later Roman mythology, she was also referred to as "Magna Mater" or the "Great Mother".  It is well known that, in ancient Roman life, men ruled the empire, but women were the undisputed masters of the home.

This was a very appropriate symbol for the first French stamps, considering that agriculture has historically been such a huge part of the national economy of France.  In fact, even to modern times, the allegorical representation of the French republic has always been depicted either as a heroic female figure in battle or as a simple Sower (Semeuse) scattering seeds on the plowed ground. 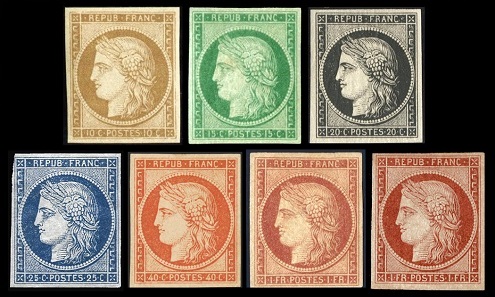 The seven new major-type French postage stamps shown above were issued during 1849 and 1850.  They were all imperforate, unwatermarked, and typographed on white or lightly tinted papers.

The 40 Cent. denomination comes in two types, with the differences being the numeral "4".  The Y&T catalog refers to Type II as a "re-entry", which is probably a more appropriate description.  They are shown above.  Type II is very rare.

All of these early French stamps exist in tête-bêche pairs, except for the 40 C. denomination.  They are all exceedingly rare, and they are priced far beyond the reach of most collectors.

Trial printings were made of the 20 C. denomination in blue, but due to the postal rate change to 25 C., the new stamps were deemed unnecessary, and they were never issued.

At the same time, some of the blue 20 C. denomination stamps were overprinted and re-valued to "25c".  These are considered "essays".

In 1852, the French postage stamps were still inscribed "REPUB FRANC", but the effigy on two of the denominations was changed from that of "Ceres" to that of "Louis Napoleon".

In December 1852, Louis Napoleon dissolved the 2nd Republic and proclaimed the 2nd French Empire.  He was crowned Emperor Napoleon III on December 2, 1852, the 48th Anniversary of the Coronation of Napoleon Bonaparte.


All of the French stamps, issued between 1849 and 1852 were reprinted in 1862.  They are printed in brighter colors and on whiter paper than the original stamps.