Collecting French stamps has always been very popular with stamp collectors all over the World.  France, with over 2,000 years of recorded history, has had more influence on Western culture than practically any other country.  And, much of that history has been commemorated on their postage stamps over the past two centuries.

On January 1, 1849, the newly created 2nd Republic of France issued the two postage stamps shown above, becoming the 8th country in the World to implement adhesive postage stamps for the prepayment of letter mail. 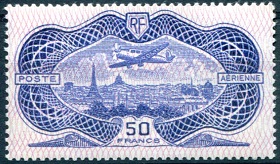 Twentieth Century commemorative French stamps are considered by many to be the most beautiful in the world.  Most of the commemorative postage stamps of France were engraved on paper of excellent quality, making them miniature "works of art" in their own right.

Two French airmail stamps of 1936, depicting a plane over the City of Paris, are shown directly above.

Links to historical articles and reviews of each of the individual issues of the classical and early modern stamps of France will eventually appear at the top of the third column of this page.

A few months ago, a website visitor from France sent me a copy of the 2017 Edition of the Yvert & Tellier "Timbres de France" catalog (Tome 1).  In appreciation for his generous gift, all of the catalog number attributes cited in this website category will be from both the Yvert & Tellier (Y&T) and the Scott (Sc.) catalogs.

Tête-bêche is a French language term, literally meaning "tumble" or "head-to-toe".  Similarly, the Germans use Kopfstehende, meaning "standing on its head".

In philately, this term usually refers to 20th Century booklet stamps printed in sheets with half the stamps printed upside-down in relation to the other half.  This was done intentionally, so that when the booklet stamps were cut from the sheet, each block of stamps would have a left-hand margin, enabling it to be stapled into vending booklets.  Pairs and blocks from un-severed booklet sheets are relatively common. 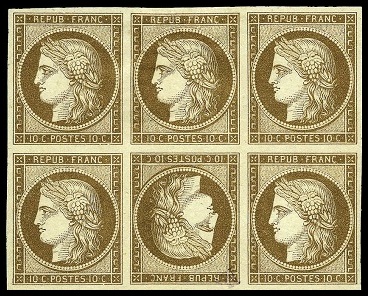 HOWEVER, in 19th Century French philately, the term refers to some of the GREATEST RARITIES in the philatelic World!  The tête-bêche pairs occurring on French definitive postage stamps, printed between 1849 and 1875, were NOT INTENTIONALLY MANUFACTURED in this manner.  THEY ARE PLATE ERRORS of EXTREME RARITY.

On some of the plates used to print these stamps .... when the die was used to make an impression on the printing plate, it was accidentally positioned upside-down in relation to the other impressions on the plate.

Most stamp collectors will NEVER OWN any of these tête-bêche pairs, especially those from the 1849-1850 issues.  The three items pictured above (images acquired from the internet) have a combined 2018 Scott Catalog value of $441,000.00!

The Richard Frajola website has an excellent article on the 19th Century Classic Errors of France (in PDF format).  For those wishing to explore these errors in greater detail, there is an outgoing link to the article below.