For the Freistadt Danzig (Free City of Danzig), the period from 1924 to 1929 seems to have been a quiet time.  In researching its history online, little could be found for the period between the end of the hyperinflation of 1923 and the ascension to power by the NAZI party in 1933.

During 1924, a brand new series of definitive postage stamps, utilizing a modernistic version of the Coat of Arms definitive types of 1921, began to appear.  Additional printings and new denominations of these definitive stamps would continue until 1938.

The Scott Catalogue lists all of these webbing watermarked definitive stamps as a single set, spanning from 1924 to 1937.  This does not fit in well with the chronological sequence of the listings in the Michel catalog, and it can make the organization and understanding of these stamps extremely complex.  In order to simplify things, the Michel catalog listing sequence will continue to be used for these Coat of Arms type definitive stamps. 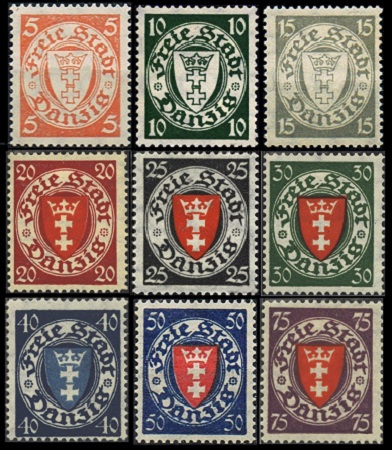 The nine new definitive Coat-of-Arms-type stamp denominations shown above were first issued during 1924, with additional printings continuing until 1937.  These stamps were all printed on paper with the  sideways webbing watermark, and they are all perforated 14.

The 5 Pf. on white paper also exists with an upright webbing watermark.  This variety is expensive.  The 5 Pf., 10 Pf., and 15 Pf. denomination stamps were also issued in booklets, but single stamps from them are identical in appearance to the same stamps issued in sheet format.

The major types of these new stamps are shown in the two images below.

The catalog attributes, for Freistadt Danzig stamps printed on white paper, are as follows.

The catalog attributes, for Freistadt Danzig stamps printed on yellowish paper, are as follows.

The catalog attributes, for coil stamps with syncopated perforations, are as follows.

The five new Freistadt Danzig airmail stamps shown above (Mi. #202-06, Sc. #C26-30) were issued during June 1924.  The new designs feature a monoplane over a silhouetted view of the Freistadt Danzig (Free City of Danzig). 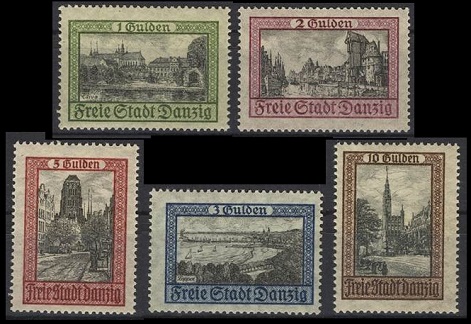 The five high-denomination scenic definitive postage stamps shown above (Mi. #207-11, Sc. #193, #195, #197-99) feature noteworthy monuments of the Freistadt Danzig.  They were issued between September and November of 1924.  They are engraved, perforated 14, and watermarked lozenges.

The used prices in the catalogs are for stamps with regular postal cancellations (circular date stamps).  These stamps, with parcel post cancels, as shown directly above, are worth only a fraction of the used catalog prices.

The two high-denomination scenic definitive postage stamps shown above (Mi. #212-13, Sc. #194a, #196) were first issued in 1925, with additional printings through 1932.  They are identical in denomination and design to the previous issue, however the border colors have been changed.

The three Coat-of-Arms-type definitive postage stamps shown above were issued between 1925 and 1927, with additional printings through 1935.

The catalog attributes, for stamps printed on white paper, are as follows.

The catalog attributes, for stamps printed on yellowish paper, are as follows.

The three surtaxed stamps shown above (Mi. #217-19, Sc. #B6-8) were issued on July 7, 1929 to celebrate the International Philatelic Exhibition held in Danzig that year.  They sold for double face value, with the proceeds going to the exhibition.

The designs feature the Neptune Fountain in the Langenmarkt.  Neptune was the Roman God of the Sea.