The Freistadt Danzig (Free City of Danzig) was proclaimed by the League of Nations on November 15, 1920.

A new constitution was drafted for the new sovereign city-state, providing for a legislature composed of a senate and a popular assembly, though the city-state actually remained under control of the League of Nations throughout its existence.

The president of the senate served as the de facto chief executive of the new state, but actual executive power was wielded by the High Commissioner, who was chosen at intervals by the member states of the League of Nations. 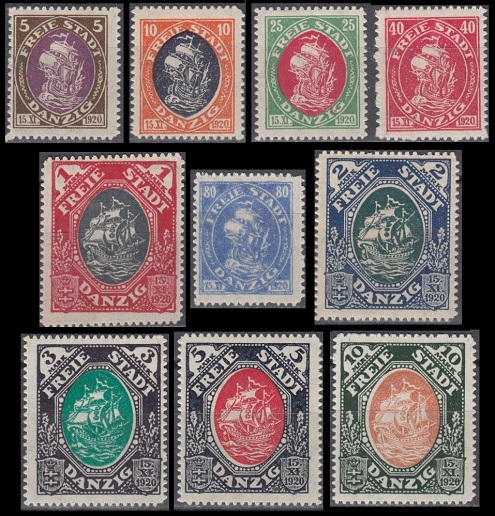 The ten pictorial definitive stamps shown above (Mi. #53-62, Sc. #49-58) were issued on January 31, 1921 to celebrate the the new constitution of the Freistadt Danzig.  These new stamps were typographed, serrate rouletted 13 1/2, and the paper was watermarked with a honeycomb pattern.

The designs feature a Hanseatic Trading Ship, symbolizing the historical importance of the port city of Danzig as a major Baltic Sea trading center.

All of the stamps in this set are also known imperforate and part perforated, though they were not officially issued in that manner. 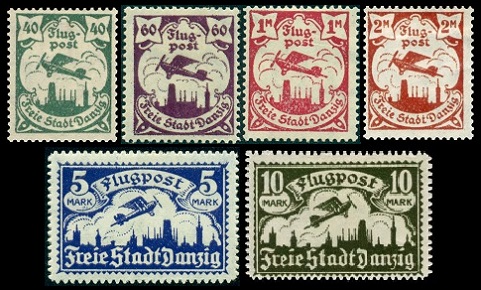 These stamps exist imperforate and are not terribly expensive. 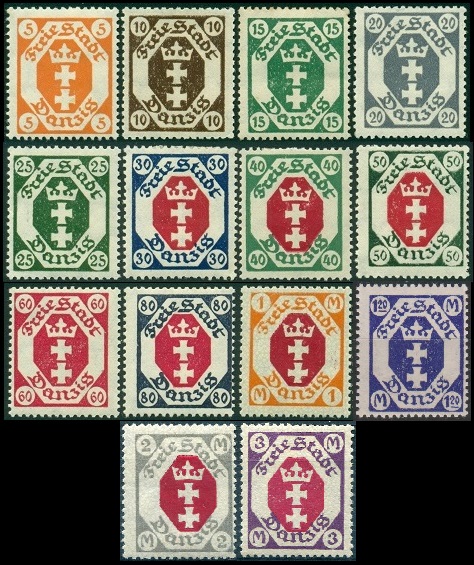 These stamps are printed on paper with the upright honeycomb watermark, and they are serrate rouletted 13 1/2.

The 1922 printings of these stamps (Mi. #87Y-89Y, Sc. N/L) have the sideways honeycomb watermark.  They are about the same price as the 1921 printings with the upright watermark.

All of these stamps exist imperforate and they are reasonably affordable.


Return to Danzig from
Freistadt Danzig - Issues of 1921