The first provisional Faroe Islands stamps appeared at the beginning of 1919, out of necessity!

The Danish postal service raised the letter postage rate to 7 øre.  During World War I, shipments between Denmark and their territory of the Faroe Islands were problematic.  It was unlikely that the new 7 øre stamps would arrive from Denmark in time for the postage rate increase on January 1, 1919. 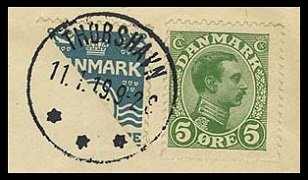 The provisional Faroe Islands stamps (Danish stamps used in the Faroe Islands) shown above were used in this manner from approximately January 3, 1919 to January 23, 1919.  The example shown above is cropped from an image of an authenticated cover sold by a major philatelic auction house.

These bisected stamps are listed under Denmark, and the catalog attributes are as follows:

These two stamps were ONLY USED in this manner in the Faroe Islands.  To be authentic, the stamps MUST BE tied to piece or to cover, and they must be postmarked between January 3 and January 23, 1919.

On January 14, 1919, the postmaster in the Faroe Islands was authorized to create 2 øre postage stamps, by re-valuing stocks of the plentiful 5 øre stamps with a 2 øre overprint.  These 2 øre stamps were used in combination with normal 5 øre stamps, to make up the new postage rate of 7 øre.  An authenticated example from a major auction house is shown above.

The 5 øre denomination provisional Faroe Islands stamp shown above was overprinted and re-valued during January 1919.

There are numerous forgeries of this stamp.  One should only purchase authenticated examples.

On April 9, 1940, Germany invaded Denmark.  Three days later, on April 12, Great Britain invaded and occupied the Faroe Islands.  This was done to strengthen Great Britain's control of the North Atlantic and to prevent Germany from taking control of the former Danish territory.  In 1942 and 1943, the British Royal Engineers built the first airport in the Faroe Islands, located on the island of Vágar. 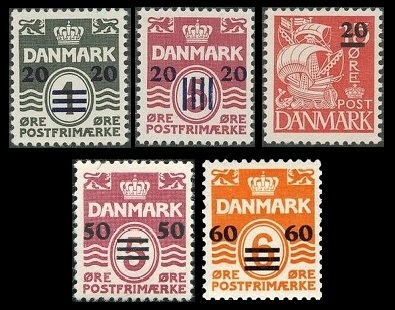 The five re-valued provisional Faroe Islands stamps shown above were issued in 1940 and 1941, at the beginning of the British wartime administration of the islands.

After the end of World War II, Great Britain returned the Faroe Islands to the Kingdom of Denmark, and the use of contemporary Danish postage stamps resumed.

The Faroe Islands would not produce their own postage stamps until January 1975.