The DDR, like other emerging Communist states in the aftermath of World War II, established a "five-year-plan", focused on industrialization, as a nation-wide exercise in rapid economic development.

In 1953, the German Democratic Republic began issuing a set of definitive postage stamps to publicize their current five year plan. The worthless, canceled-to-order examples everyone remembers from stamp packets of the 1960's were never even part of the actual five-year-plan definitive postage stamp series -- They were later reprints, made around 1957, for collectors, and they were never actually valid for postal use in East Germany.

The scope of this series is much wider than that, and for the collector that studies the different printings, varieties, cancellations, and postal history of this issue, it can be a very rewarding experience and make for a very attractive collection display. 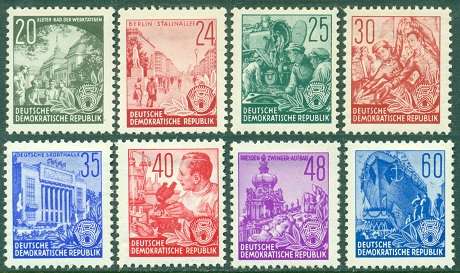 The designs of the reprints differ slightly from those of the original first printing.  All the reprints are canceled-to-order, as described above, and they were produced for sale to collectors. Fourteen town cancels were used for the 1957 reprints, and they all have 1956 dates on them. The reprints were never sold to the public un-canceled, and they were never valid for postage. For more information on the details of the reprints and the printed cancels that were applied to them, please see the Michel Deutschland-Spezial-Katalog.

All mint and postally used examples are from the original first printing. Postally used examples of the first printing are very scarce, and in some cases, they are worth as much as the corresponding mint condition examples. The "precanceled" reprints have very little value today, though having them would be a necessity for a complete study of these five-year-plan issues. 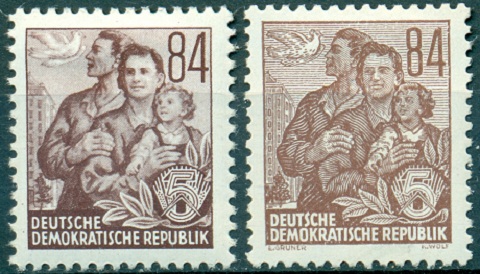 At first sight, the differences on the 84 Pf. stamps seem obvious, but some of the other denominations may be more difficult to tell apart.

There are, however, several differences in the printings, which should make separating them even easier.

Later typographed printings have basically the same "printing" characteristics as those described above. 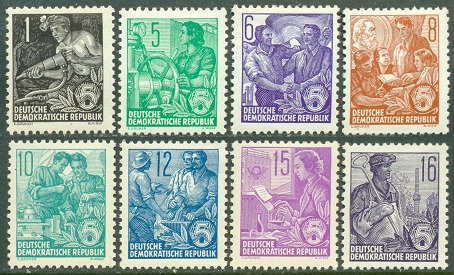 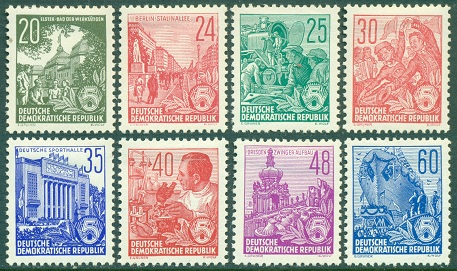 Beginning in November 1953, the DDR began issuing redrawn, typographed versions of the five-year-plan definitives. Their characteristics are described in the previous section.

These new stamps (Mi. #405x-422x, Sc. #187-04) were also perforated 13 x 12 1/2, and printed on paper with a multiple DDR and Posthorns watermark. Stamps from this printing are known both with upright and sideways watermarks. The sideways watermarks are very high priced.

The designs and denominations were unchanged from the August 1953 lithographed issues.

The 5 Pf. denomination was also issued in booklets.

Reprints were also made of this second printing in 1957. Their attributes are the same as those of the reprints of the August 1953 lithographed issues. 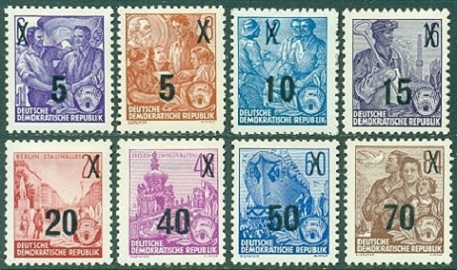 Other re-valuations of the lithographed first printing set are forgeries. 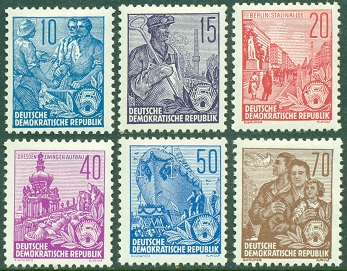 The 10 Pf. blue was also used in booklet panes. 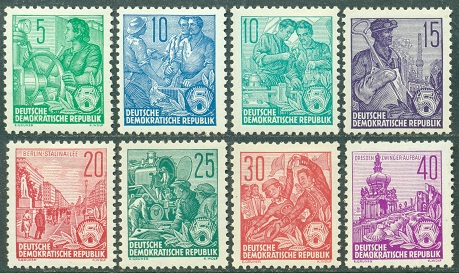 The canceled-to-order examples of these stamps are all from the original 1957 printing. 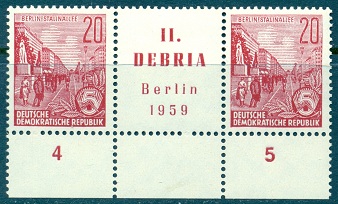 The canceled-to-order examples of these stamps are all from the original 1958-1959 printings.

The 20 Pf. stamps, shown at the bottom of the scans above (Mi. #580BZ, Sc. #478a) were issued on September 4, 1959 to commemorate the Second German Philatelic Exhibiton of the DDR in Berlin. The regular 20 Pf. stamp design was used, but the sheets were modified to include sixty stamps and 40 commemorative labels. 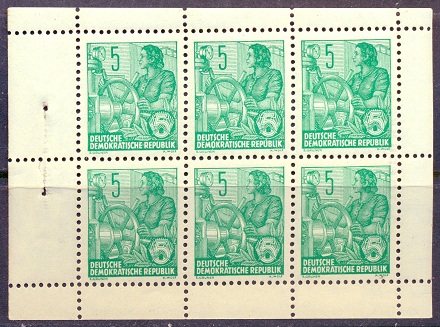 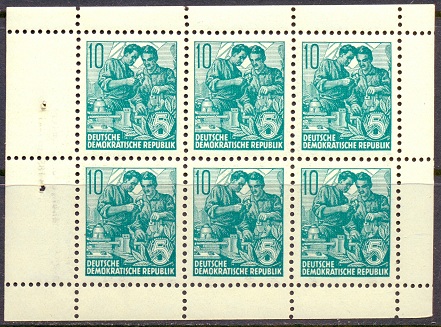 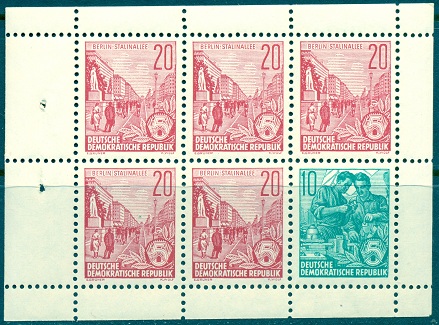 The scans above depict three booklet panes from the DDR 1957 five-year-plan definitive issue.

Return to German Democratic Republic from
DDR - Definitives of 1953-1959