The DDR issued a very large volume of stamps during 1955, but then again, there were a number of significant events to be honored during the year.  There were two issues, including souvenir sheets, designated for Friedrich Schiller Year and Friedrich Engels Year.    The year ended with the introduction of two new thematic annual series of stamps, the first celebrating historical East German buildings and the second celebrating works of art in East German museums.

The year 1955 was also the 10th anniversary of the end of World War II, what the Union of Soviet Socialist Republics referred to as The Great Patriotic War.  This was a very important patriotic holiday for the Soviet Union, and they encouraged their Eastern European allies to commemorate Freedom from Fascism every year, as well.  A DDR stamp and souvenir sheet was issued for this event in 1955, and in later years, a series of pictorial stamps honoring German underground fighters would be introduced.  Over twenty million Soviet citizens (more than the population of many European countries), with most of them being defenseless civilians, lost their lives during the Great Patriotic War, and this was a tragedy that would never be forgotten.

The two designs feature the USSR Pavilion and the China Pavilion at the Leipzig Fair. 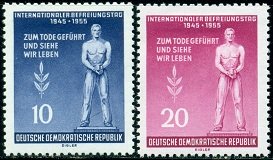 The design features a Cenotaph at the Soviet War Memorial in Brandenburg an der Havel.  The inscription on the stamp reads "ZUM TODE GEFÜHRT UND SIEHE WIR LEBEN" or paraphrased in English, "OUT OF DEATH, WE HAVE COME TO LIVE". 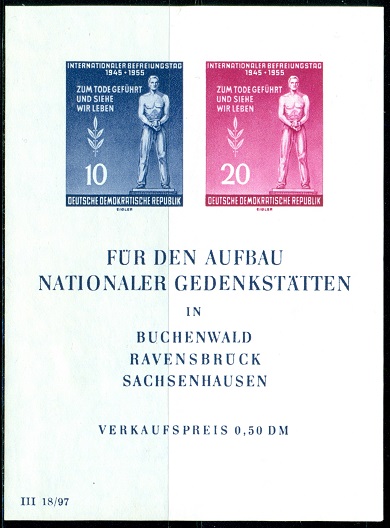 The International Day of Freedom From Fascism souvenir sheet shown above (Mi. #459B-60B (Block11), Sc. #237a) sold for 50 Pfennig, with the proceeds being contributed to a fund for the construction of national memorials at Buchenwald, Ravensbruck, and Sachsenhausen, the sites of former concentration camps.

The 10 Pf. and 20 Pf. denomination stamps exist with horizontal watermarks, and as such, they are very rare. 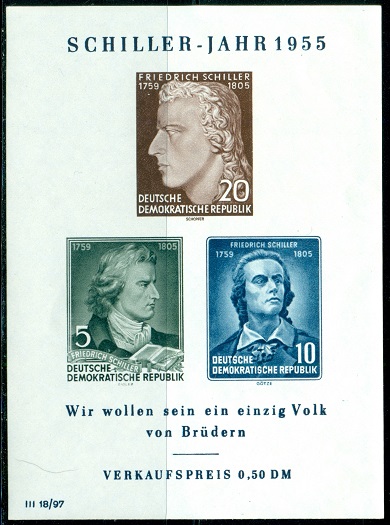 The quote on the sheet is "Wir wollen sein ein einzig Volk von Brüdern" which translates to "We want to be a single nation of brothers". 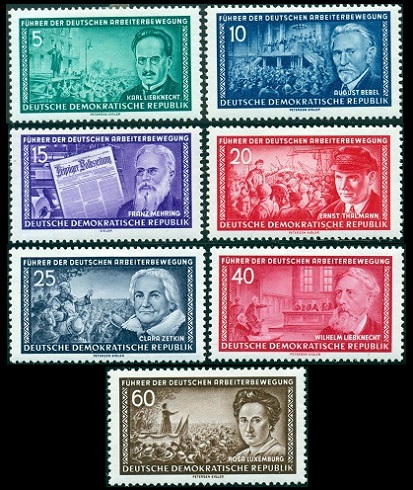 The leaders, as depicted, are:

The two designs feature optical goods and the fine china at the Leipzig Fair. 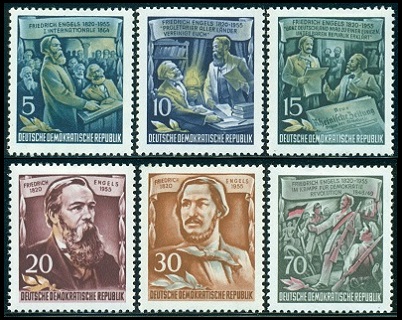 The six DDR pictorial stamps shown above (Mi. #485A-90A, Sc. #259-64) were issued on November 7, 1955 to celebrate Friedrich Engels Year and to commemorate the 60th Anniversary of the Death of Friedrich Engels.

The 05 Pf. denomination stamp exists with a horizontal watermark, and as such, it is very scarce.

Friedrich Engels (1820-1895) was a German social scientist, author, political theorist, and philosopher.  Along with Karl Marx (1818-1883), he is considered the founding father of Marxist Theory.

The descriptions of these stamps are as follows: 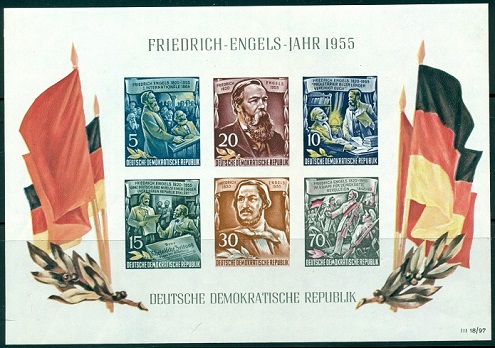 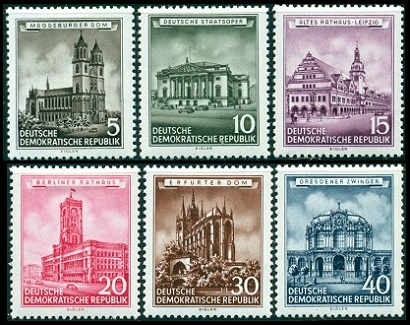 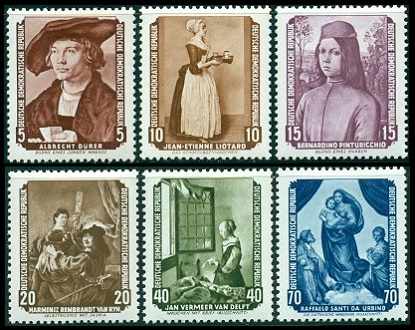 The six painting-themed pictorial stamps shown above (Mi. #504-09, Sc. #272-77) were issued on December 15, 1955 to publicize the Return of Famous Paintings to the Dresden Art Gallery by the Soviet Union.

The descriptions are as follows:

Return to German Democratic Republic from
DDR - Commemoratives of 1955 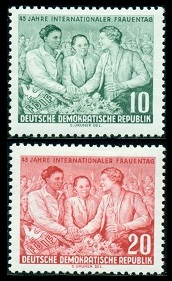 The design of the two stamps features a representation of women from different countries.

The design features the now famous Memorial to the Fallen Soldiers of the Red Army in Berlin.