Though the volume of DDR postage stamps issued during 1954 was much smaller during 1953, they covered a wide range of contemporary subjects.  Some of the new commemorative stamp issues for 1954 featured an important peace conference, the anniversary of the German Democratic Republic, and a new souvenir sheet for an important German philatelic exhibition.  The customary annual stamps for youth activities, commercial fairs, and sporting events continued to be issued, as well. 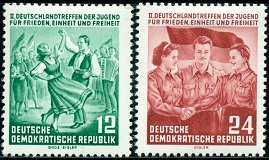 The two designs feature dancers and a boy, two girls, and a flag.

The designs feature the Hall of Commerce at the Leipzig Fair. 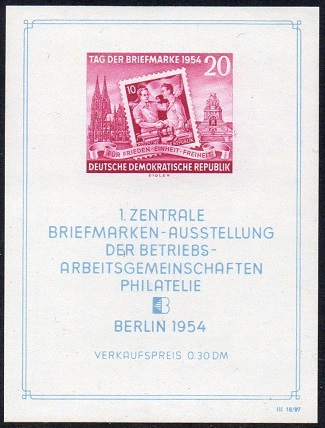 The souvenir sheet shown above (Mi. #445B (Block 10), Sc. #226a), containing an imperforate example of the 1954 Stamp Day Issue, was issued on October 30, 1954 for the First Central Philatelic Exhibition of Labor Unions in Berlin.

Return to German Democratic Republic from
DDR - Commemoratives of 1954

The major topics discussed were the final post-war international status of Austria and Germany and the conclusion of the Korean War.