The DDR, Deutsche Demokratische Republik, or German Democratic Republic, as it is called in English was proclaimed on October 7, 1949.  Two days later, the new country, issued their first commemorative postage stamp, celebrating the anniversary of the Universal Postal Union.  Many of the early stamps of the German Democratic Republic reflected Socialist political themes, emphasizing social, industrial, and agricultural progress within their Communist state. 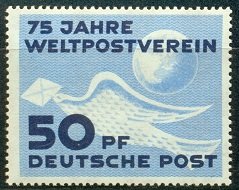 The designs feature two letter carriers, a globe, and the Brandenburg Gate in Berlin.

The two designs feature a skier and a skater.

The illustrations on the stamps are as follows: 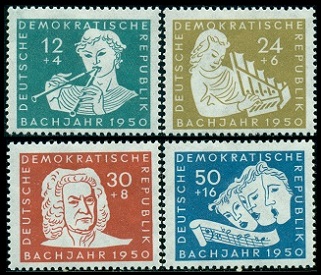 The designs on the stamps are as follows: 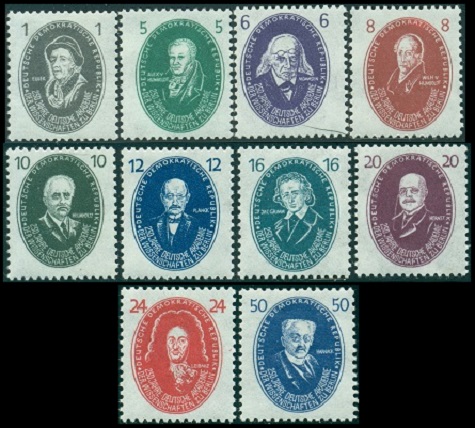 The portraits on each of the stamps are as follows:

The design features a magnifying glass and the first Bavarian postage stamp.


The 84 Pf. + 41 Pf. denomination stamp shown above, at the right (Mi. #272, Sc. #B21), was issued on July 1, 1950 to publicize and benefit the up-coming German Postage Stamp Exhibition (DEBRIA) at Leipzig and to commemorate the 100th Anniversary of the first Saxony postage stamp.

The design features a globe, dove, and the first Saxony postage stamp. 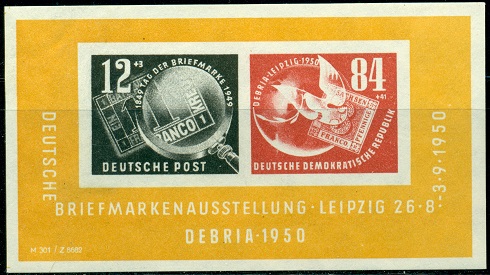 The two designs feature depictions of mining and smelting. 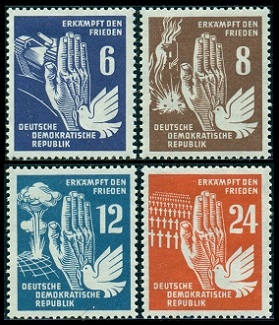 The designs feature a hand shielding a dove from:  a tank, an exploding shell, a nuclear explosion, and a cemetery.

Return to German Democratic Republic from
DDR - Commemoratives of 1949-1950