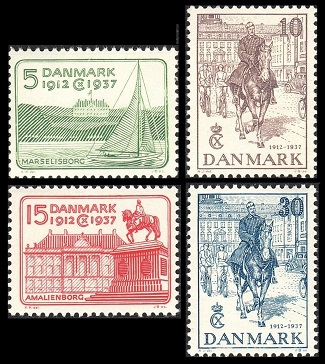 The four commemorative Danish stamps shown above (Sc. #258-261) were issued on May 15, 1937 to celebrate the 25th Anniversary of the Reign of King Christian X.

The overprinted 5 Ø. denomination stamp shown above (Sc. #263) was issued on September 2, 1938 to publicize the 10th Danish Philatelic Exhibition.

These stamps were issued in panes with the overprints on alternate stamps.  They are usually collected in pairs, strips, or blocks, showing the alternating overprints.

The three Danish stamps shown above (Sc. #264-266) were issued on November 17, 1938 to commemorate the 100th Anniversary of Bertel Thorvaldsen's Return to Denmark.

Bertel Thorvaldsen (1770-1844) was an internationally known Neoclassical sculptor from Denmark.  He spent much of his professional life studying and working in Italy.  When he returned to Denmark in 1838, he was received as a national hero.  During his life, he was regarded as the successor to the master Italian sculptor, Antonio Canova. 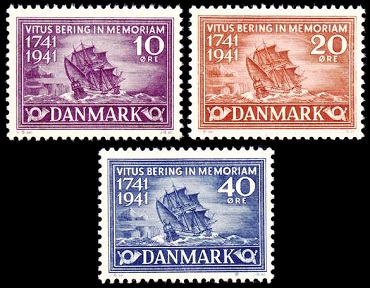 The three pictorial Danish stamps shown above (Sc. #277-279) were issued on November 27, 1941 to commemorate the 200th Anniversary of the Death of Vitus Bering.

Vitus Jonassen Bering (1681-1741), a.k.a. Ivan Ivanovich Bering, was a Danish cartographer and explorer in the service of the Russian Empire.

Bering set out on his second expedition, to explore North America, in 1741.  During his second expedition, Mt. Saint Elias (in Alaska) and Kodiak Island were sighted, and a landing was made at Kayak Island, off the Southern coast of Alaska.  Later on, Bering also mapped some of the Aleutian Islands.  Bering became very ill on the return trip, and his ship was forced to seek refuge at an uninhabited island of the Commander Islands group in the Southwestern portion of what is now the Bering Sea.  Bering and twenty-eight of his crew members were buried on the island which now bears his name.

The Bering Strait, Bering Sea, Bering Island, Bering Glacier, and Bering Land Bridge were all named in his honor. 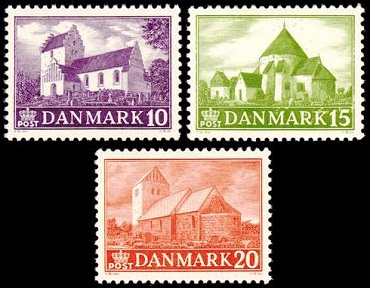 
Return to Danish Stamps from
Commemoratives of 1937-1945

The overprinted 10 Ø. denomination stamp shown above (Sc. #257) was issued on September 17, 1937 to publicize the Jubilee Philatelic Exhibition of the Copenhagen Philatelic Club on their 50th Anniversary.

The stamps were only available for sale at the exhibition, with the purchase of an admission ticket.

The design features the Emancipation Column in Copenhagen.

The 10 Ø. denomination stamp shown above (Sc. #288) was issued on November 27, 1942 to commemorate the 300th Anniversary of the Round Tower in Copenhagen.

The Round Tower was built in the 17th Century for use as an astronomical observatory.

The 20 Ø. denomination stamp shown above (Sc. #289) was issued on October 29, 1943 to commemorate the 25th Anniversary of the Danish Aviation Company.

The 20 Ø. denomination stamp shown above (Sc. #293) was issued on September 25, 1944 to celebrate the 300th Anniversary of the Birth of Ole Roemer, the Danish astronomer.