The first Danish stamps, issued for the purpose of raising money for charitable purposes, appeared in 1921.  These are regular definitive and commemorative postage stamps, but they have a "value added tax" or "surtax" on them, designed to raise money for national organizations, public events, and public charities.  In this category, they will be referred to as "Charity Stamps".

The two surtaxed commemorative Schleswig-type Danish stamps of 1920 shown above (Sc. #B1-B2) were issued on June 17, 1921.  The surtax benefited the Red Cross. 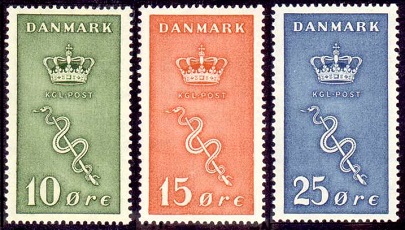 The three pictorial Danish stamps shown above (Sc. #B3-B5) were issued on August 1, 1929.  Each of these stamps was sold with a 5 Øre surtax, which was for the benefit of the Danish Cancer Committee.

The rather simple common design features a Crown and the Staff of Aesculapius.

These three charity stamps exist in booklet panes, with each containing two stamps.

The three surtaxed pictorial Danish stamps shown above (Sc. #B6-B8) were issued on January 20, 1937, as a Memorial to Hans Peter Hanssen.  The surtax benefited the Hanssen Memorial Fund.

The common design of these charity stamps features Dybbol Mill, the sight of the Battle of Dybbol during the Second Schleswig War in April 1864.  The battle resulted in a loss for the Kingdom of Denmark and in the Duchy of Schleswig being annexed by the Prussian Empire.

The three surtaxed pictorial Danish charity stamps shown above (Sc. #B9-B11) were issued in 1939 and 1940.  The surtax benefited the Danish Red Cross.

Scott #B9 and #B10 were also issued in booklets.

The common design of these charity stamps features a portrait of Queen Alexandrine.

Alexandrine Auguste of Mecklenburg-Schwerin (Lived: 1879-1952, Queen Consort: 1912-1947) was the Queen Consort of Denmark, as the wife of King Christian X.  As a survivor of the 1918 Flu Pandemic, she devoted much of her life to supporting public charities and to providing aid to the poor. 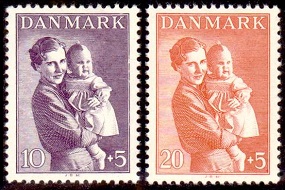 The two surtaxed pictorial Danish charity stamps shown above (Sc. #B12-B13) were issued on May 11, 1944.  The surtax benefited the Children's Charity Fund.

Scott #B12 was also issued in booklets.

The common design of these charity stamps features a portrait of Crown Princess Ingrid, the future Queen Consort of Denmark, as the wife of King Frederick IX, and Princess Margrethe, the reigning Queen Margrethe II of Denmark.

The overprinted and surtaxed commemorative Round-Tower-type stamp of 1942 shown above (Sc. #B14) was issued on May 11, 1944.  The surtax benefited the Danish Red Cross.