The first Commemorative Danish stamps appeared in 1920, with an issue commemorating the return of Northern Schleswig to Denmark following World War I.  Other commemorative stamps issued during the period from 1920 to 1936 included the anniversaries of the Danish Postal Service, the first Danish postage stamps, and the 60th birthday of the king. 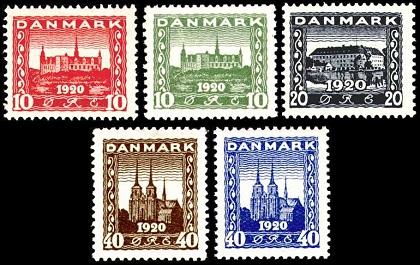 The five commemorative Danish stamps shown above (Sc. #156-160) were issued in 1920 and 1921 to celebrate the Return of Northern Schleswig to Denmark. 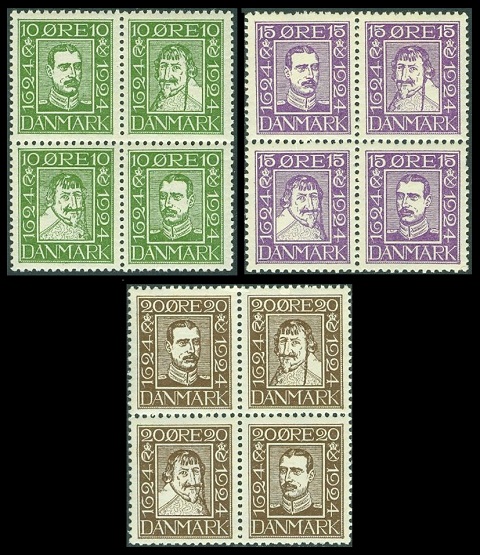 The twelve commemorative Danish stamps shown above (Sc. #164-175) were issued on December 1, 1924 to celebrate the 300th Anniversary of the Danish Postal Service.

There are four designs for each denomination, printed se-tenant within each sheet of stamps.  These stamps can be collected as twelve singles or as three se-tenant blocks.  The stamps feature right-facing and left-facing profiles of the Danish monarchs of 1624 and 1924, as follows.

The three commemorative stamps shown above (Sc. #178-180) were issued on March 11, 1926 to celebrate the 75th Anniversary of Danish postage stamps.

The designs of these three stamps are very similar to those used for the definitive postage stamps of 1851. 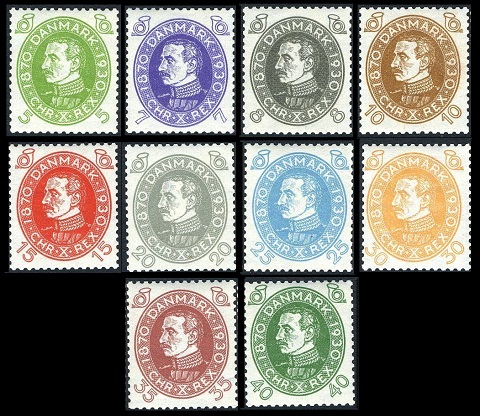 The 05 Ø. and 10 Ø. denominations were also issued in booklets, with some of the stamps having adjoining advertising labels. 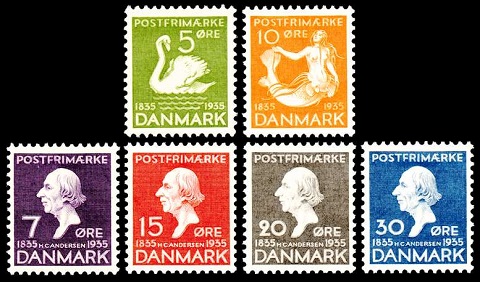 The six commemorative Danish stamps shown above (Sc. #246-251) were issued on October 1, 1935 to celebrate the 100th Anniversary of the first publication of Hans Christian Andersen's Fairy Tales.  His first publication was called "Eventyr", meaning "Fantastic Tales".

The 05 Ø., 10 Ø., and 15 Ø. denominations were also issued in booklets.  As such, they are also available in tête-bêche pairs, gutter pairs, and tête-bêche gutter pairs.

Hans Christian Andersen (1805-1875) was a Danish writer.  Though he was a prolific writer of plays, travelogues, novels, and poems, Hans Christian Andersen is most remembered for his fairy tales, which have been enjoyed by both children and adults around the World.  Among them are "The Princess and the Pea", "The Emperor's New Clothes", "The Little Mermaid", "The Nightingale", "The Ugly Duckling", and "Thumbelina".   Many of his stories have been the inspiration for modern ballets, plays, animated films, and live action films. 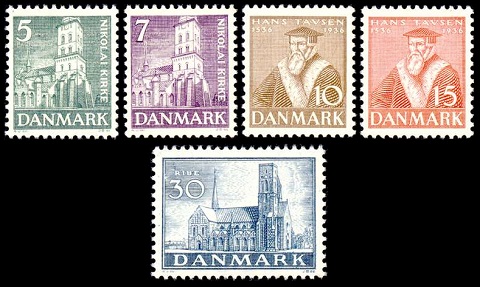 The five commemorative Danish stamps shown above (Sc. #252-256) were issued between August and October 1936 to celebrate the 450th Anniversary of the Reformation in Denmark.

The 05 Ø., and 10 Ø. denominations were also issued in booklets.


Return to Danish Stamps from
Commemoratives of 1920-1936