The first Danish stamps (shown above), for the prepayment of postage on letter mail, appeared in 1851.  The modern Kingdom of Denmark includes the Jutland Peninsula and its surrounding islands, the Faroe Islands, and Greenland, though the Faroe Islands and Greenland have also issued their own postage stamps.

With Denmark's ideal location in northern Europe, between the North Sea and the Baltic Sea, the Danish have been a seafaring people for much of their long history.

The Jutes were the original inhabitants of what we know as the Jutland Peninsula.  The Danes actually came from the island of Zeeland, where the modern city of Copenhagen is located.

During the Roman Empire, the Romans never had any territorial aspirations that far north, but the Romans did trade with the Jutes, as evidenced by the discovery of many Roman coins in the Jutland Peninsula.

The Jutes also migrated to southern England during the late 4th Century, along with the Angle and Saxon migrations from Northern Europe. 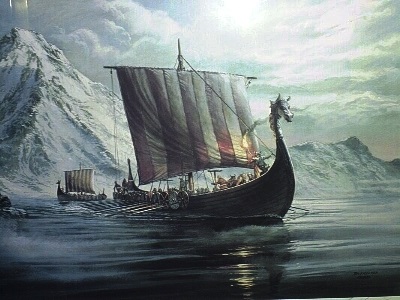 From about 790 until 1066, the present-day Jutland Peninsula was the center of the Viking Empire, which stretched from the Baltic Sea to North America.  At its greatest extent, the Viking Empire included the present day Scandinavian countries, Western Russia, England, Iceland, Greenland, coastal areas of Northern Europe, and the territory of Vinland, in present-day Newfoundland.  Just about everywhere there was a waterway that could be navigated, the Vikings had a presence!

The first mention of "Danmark" was on runic funerary stones erected by the Viking King Gorm the Old (Lived: c. 900-958, Reigned: 936-958), and he is considered the first King of Danmark.  His successor, Harald Bluetooth (Lived: c. 935-986, Reigned: 958-986), converted to Christianity in around 960.  This is the benchmark in history where the  Kingdom of Danmark (Denmark) begins.  From this point on, the people, formerly referred to as the Vikings, have been referred to as the Danes.  This benchmark makes the Kingdom of Denmark the oldest continuous monarchy in Europe!

Collecting Danish stamps can be as simple or as complex as collectors wish to make them.

For the stamp collector that takes the approach of collecting one example of each major stamp of Denmark, this can be a worthwhile adventure.  A relatively complete collection of the major varieties of the stamps of Denmark is actually attainable.  Even the classical postage stamps of Denmark, if collected in used condition, are not unreasonably expensive.

For the specialist, the philately of Denmark offers a number of fields for study, including plate and shade varieties on the earliest issues, the inverted frames on the later 19th Century issues, and the early vending booklets and booklet panes.  Add on postal history and postmarks and this could develop into a lifetime project. 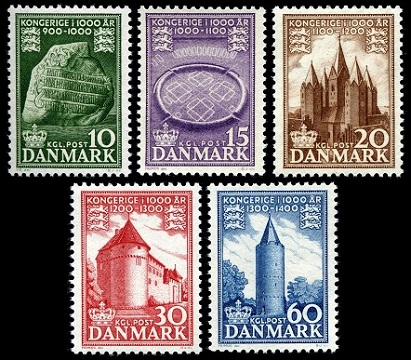 Commemorative Danish Stamps of 1953-1954
1,000th Anniversary of the Kingdom of Denmark

For much of the 20th century, the Kingdom of Denmark maintained a rather conservative policy of the annual numbers of commemorative postage stamps issued, which makes collecting them quite manageable.  Most of the commemorative stamps of Denmark are engraved, and they highlight the people, places, and events in the history of this ancient country. 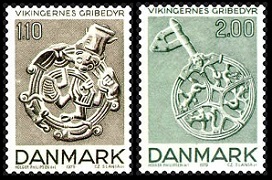 Links to historical articles and reviews of each of the individual classical and early modern postage stamp issues of Denmark will eventually appear at the top of the third column of this page.