At the same time though, the commemorative stamps of 1939 begin to show the sad fact that the Republic of Czechoslovakia was disintegrating.  This time, it wasn't at the hands of their former masters, the Austrians.  Austria had already vanished from the map of Europe.  Their new masters were the Germans, and German domination would obliterate the Czechoslovakian Republic from the map of Europe, during a World War that would last for the next six years! 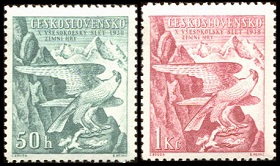 The two commemorative Czechoslovakia stamps shown above were issued on January 21, 1938 to publicize the 10th International Sokol Winter Games, held in Czechoslovakia.

Philatelically, besides these two postage stamps, an extensive array of Cinderella stamps and picture postal cards were also created to publicize the games.

The three commemorative stamps shown above were issued during 1938 to celebrate the 20th Anniversary of the Battles of Bachmac, Vouziers, and Doss Alto.

The three commemorative stamps shown above were issued on June 18, 1938 to publicize the 10th International Sokol Summer Games, held in Czechoslovakia.

Philatelically, besides these three postage stamps, an extensive array of Cinderella stamps and picture postal cards were also created to publicize the games.

The 50 H. denomination stamp shown above, at the left, was issued on June 24, 1938 to publicize the Provincial Economic Council meeting in Pilsen.

The stamp design (Sc. #249) features a view of Pilsen.  A large industrial city, Pilsen is best known around the World for Pilsner Beer, which has been brewed there since 1842.


The 50 H. denomination Czechoslovakia stamp shown above, at the right, was issued on July 15, 1938 to publicize the Kosice Cultural Exhibition. 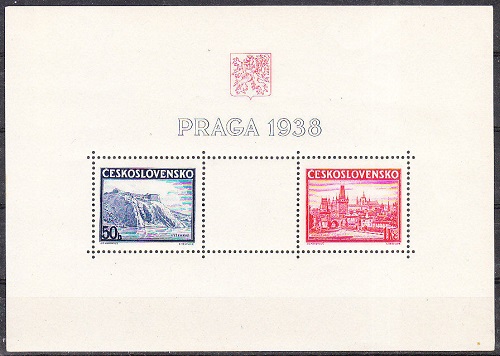 The souvenir sheet (Sc. #251) shown above was issued on June 26, 1938 for the Prague Philatelic Exhibition. 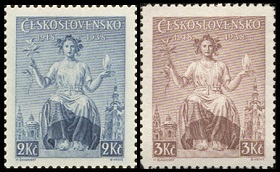 The two high-denomination commemorative Czechoslovakia stamps shown above were issued on December 19, 1938 to celebrate the 20th Anniversary of the Republic of Czechoslovakia.

The two common stamp designs (Sc. #253-254) feature the Allegory of the Republic, holding a branch and a dove.

Sadly, on March 14, 1939, Bohemia and Moravia would become a German Protectorate, and the Republic of Czechoslovakia would cease to exist.


Return to Czechoslovakia Stamps
from Commemoratives of 1938-1939 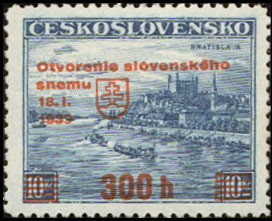 
Slovakia seceded from the Republic of Czechoslovakia in March 1939, and the First Slovak Republic, a Nazi German client state, was declared.  It was occupied by Germany in 1944.

The design features a view of the town of Jasina in Carpathian Ruthenia.

The Carpatho-Ukraine seceded from the Republic of Czechoslovakia in March 1939, but the new republic was quickly annexed by Hungary.  It remained under Hungarian control, until the end of World War II, when it then became part of the Ukrainian Soviet Socialist Republic.