For commemorative Cyprus stamps, the big event of 1953 was the coronation of Queen Elizabeth II.  A brand new series of pictorial definitive stamps were implemented in 1955, coinciding with the establishment of a new currency for Cyprus.

Far reaching social and political changes were in progress in Cyprus during this period, and ultimately, only sixteen stamps would be issued for the reign of this new monarch.

The commemorative stamp shown above (Sc. #167) was issued on June 3, 1953 to celebrate the Coronation of Queen Elizabeth II.

The design features one of the many photographs of the young queen taken by Dorothy Wilding (1893-1976), during February 1952, just a few days after the accession of the new monarch. 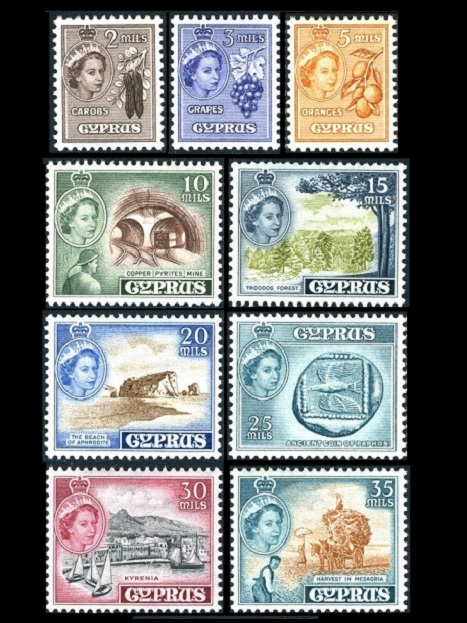 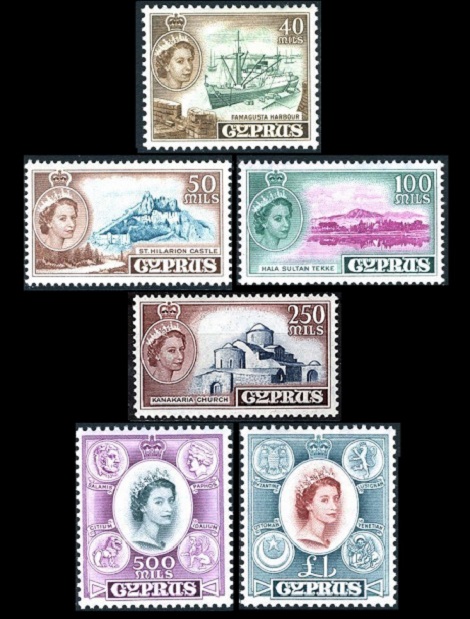 The fifteen pictorial and portrait definitive Cyprus stamps shown above (Sc. #168-182) were issued on August 1, 1955.  These stamps are all engraved, and they are printed on paper with the Multiple Crown and Script CA watermark.

The designs feature the Dorothy Wilding portrait of Queen Elizabeth II and the following pictorial subjects. 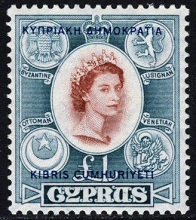 On August 16, 1960, Cyprus became an independent republic, and eighty-two years of British colonial rule came to an end.

An example is shown directly above.  The overprints are spaced and placed differently on each of the stamps in the set, depending on the particular stamp's dimensions.