Quite a few Canada stamps were issued following the accession of Queen Elizabeth II in early 1952, though the first definitive stamps with her portrait wouldn't appear until almost a year later.  In following with the trend established late in the reign of King George VI, most of the Canadian definitive postage stamp issues featured natural resources, scenery, or Canadian wildlife.

The commemorative stamp (Scott #317) shown above was issued on July 26, 1952 to publicize the 18th International Red Cross Conference, held in Toronto, Ontario during that month.

The design features a Red Cross superimposed on the Sun.

The Canadian wildlife-themed definitive postage stamps shown above were issued in 1952 and 1953. 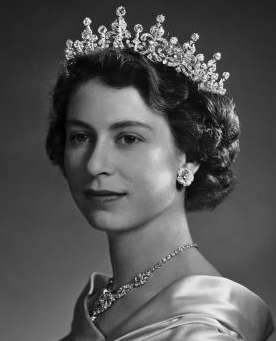 Princess Elizabeth wearing a Royal Tiara
﻿﻿﻿From: the ﻿﻿﻿﻿Photograph by Yousuf Karsh, taken at Clarence House in 1951 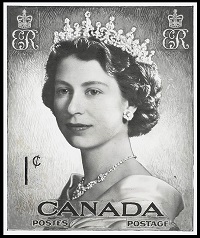 Approved Essay for the Definitive Stamps of 1953
From:  National Archives of Canada

Work had begun on the creation of the first postage stamps featuring the portrait of Queen Elizabeth II in early 1952.  The essay of the accepted design, based on a photograph by Yousuf Karsh (1908-2002), is shown above.  The essay was approved by the queen, and the process of creating the plates for the new definitive postage stamps began in early 1953.  These issues are referred to by Canadian philatelists as the "Karsh Issue".

Had the printed stamps looked anything like the essay, they may have gone down as one of the most beautiful stamp designs ever created.  But that did not happen.  Photogravure or lithography printing may have achieved this effect, but that process was not used by the government printers at that time.  One can't blame the ensuing disaster on line engraving either.  All Canada stamps, from the beginning, had been line engraved, and previous portrait and pictorial definitives all have a very attractive appearance.

The line engraved plates for these new stamps were poorly produced, and the printed stamps resulted in a very unattractive likeness of the queen, looking nothing like the original essay.  As a result, the Karsh Issue has become one of the most vilified stamp issues in the history of Canadian philately.  At the time, there was public outrage over the appearance of the queen on these new definitive stamps, as shown in the images below.

The new portrait definitive Canada stamps of Queen Elizabeth II were issued on May 1, 1953.

Return to Dominion of Canada Stamps
From Issues of 1952-1953

The design features symbols of newsprint and paper production.

The One Dollar denomination pictorial definitive stamp (Scott #321) shown above was issued on February 2, 1953.

The 50 C. denomination definitive stamp (Scott #334) shown above was issued on November 2, 1953, and it honors the Canadian textile industry.

The design features a bobbin, cloth, and spinning wheel.

This 4 C. denomination commemorative stamp (Scott #330) was issued on June 1, 1953 to celebrate the Coronation of Queen Elizabeth II.