New definitive Canada stamps appeared during late 1949.  These new lower denomination definitive stamps, featuring the portrait of King George VI, were much more modernistic looking.  There were only five perforated denominations and four horizontal coil denominations issued, but due to printing and production differences, there are quite a lot of them.

A new trend was beginning here though.  During this time period, large-format pictorial and commemorative stamps would begin to outnumber the regular definitive postage stamp issues, and this new trend for Canada stamps continues into modern-day Canadian philately.

The lower denomination portrait definitive postage stamps shown above were issued between 1949 and 1951.  These new definitive stamps of King George V are more modernistic, and the outer frame lines are beveled to differing degrees, giving the appearance of a picture frame.

This group of Canada stamps has the words "POSTES - POSTAGE" inscribed under the word "CANADA".

This group of portrait definitive Canada stamps DOES NOT have the words "POSTES - POSTAGE" inscribed under the word "CANADA".

The sheet format stamps are perforated 12.

The three higher denomination pictorial stamps shown above were issued between 1950 and 1951.  These new stamps, part of an ongoing series, highlight the Natural Resources of Canada.

The two stamps shown above were issued on June 25, 1951.  These were the first of a continuing, annual series of stamps honoring Canadian Political Leaders.

The four commemorative Canada stamps shown above were issued on September 24, 1951 to celebrate the 100th Anniversary of the British North American Postal Administrations.

Return to Dominion of Canada Stamps
From Issues of 1949-1951

The 4 C. denomination stamp (Scott #282) shown above was issued on April 1, 1949 to celebrate the Entry of Newfoundland into the Canadian Confederation. 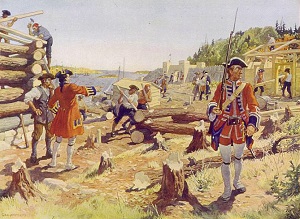 This 4 C. denomination stamp (Scott #315) was issued on October 26, 1951 to celebrate the Visit of Princess Elizabeth (Duchess of Edinburgh) and Prince Phillip (Duke of Edinburgh) to Canada and the United States. 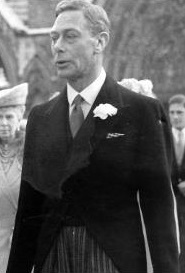 The anxiety of the succession and the performance of his duties during World War II had a devastating effect on the health of King George VI.

It was a very closely guarded state secret that only members of the royal family and their closest confidants knew about.  During the Winter of 1951, King George VI, only 55 years old, was dying of Lung Cancer.  And even with this, the king continued to perform his royal duties, on a daily basis, up to just before the evening of his death.

A little over three months after the Royal Visit stamp shown above was issued, the 25 year old Princess Elizabeth would ascend to the throne as Queen Elizabeth II.