Beginning in 1937, Canada stamps would be issued for a brand new monarch, and they would eventually include portrait definitive stamps, pictorial definitive stamps, and commemorative stamps.  With the uncertainty of the succession and war clouds looming over Europe, the future seemed ominous, but the British monarchy would endure triumphantly and heroically.

A Tale of Two Kings

The two stamps shown above were issued as part of the 1935 set of Canada stamps celebrating the Silver Jubilee of King George V.  It was a year full of joy and optimism, but that would end very quickly.  On January 20, 1936, King George V died.  The chaos of the next 11 months was to be unimaginable.  Within that time TWO kings would ascend to the throne.

On January 20, 1936, Edward, The Prince of Wales, became King Edward VIII.  Edward was young and charismatic, and at the outset of his reign, there was a great feeling of optimism.  Unfortunately though, he led a rather reckless lifestyle, and he put his personal interests above his duties to the people of the British Empire, his duty as head of the Church of England, and his duties to his government.  Less than 11 months later, he was compelled to abdicate the throne, in order to pursue his personal interests.

Edward's younger brother, Albert, The Duke of York, was never expected to be king.  Albert had a debilitating stammer, as well as other medical issues, which resulted in his being very self-conscious, shy, and prone to outbursts of anger.  Albert DID NOT WANT TO BE KING.  But, upon his older brother's abdication on December 11, 1936, Albert ascended to the throne as King George VI.  With the support of his wife, Queen Consort Elizabeth, Albert would conquer his problems, devote himself to his royal duties, and he would eventually become one of the most beloved monarchs of the 20th Century.

The first portrait definitive Canada stamps with the portrait of King George VI were issued during 1937. 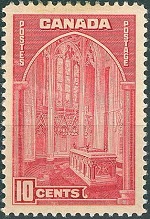 The first pictorial definitive Canada stamps for the reign of King George VI were issued during 1938.  They are all perforated 12.

Return to Dominion of Canada Stamps
From Issues of 1937-1939 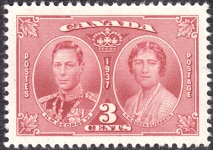 The 3 C. commemorative stamp shown above (Scott #237) was issued on May 10, 1937 to celebrate the Coronation of King George VI and Queen Elizabeth at Westminster Abbey in London. 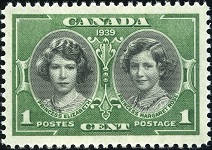 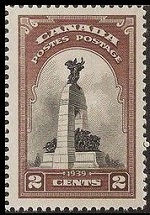 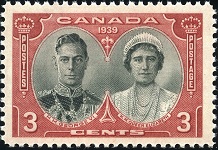 The three commemorative stamps shown above were issued on May 15, 1939 for the Visit of the Royal Family to Canada and the United States.

The 1 C. denomination (Scott #246) features the portraits of Princess Elizabeth and Princess Margaret.

The 2 C. denomination (Scott #247) features the National War Memorial, Ottawa, Ontario.  Dedicated in 1939, it is a memorial to the Canadians that died during World War I.