Many interesting commemorative Canada stamps appeared between 1933 and 1934.  And, of course, there was yet another series of King George V portrait and pictorial definitive stamps issued in 1935!

The 5 C. denomination commemorative stamp shown above was issued on May 18, 1933 to celebrate the Meeting of the Executive Committee of the Universal Postal Union in Ottawa, Ontario.

The 5 C. denomination commemorative stamp shown above was issued on August 17, 1933 to celebrate the 100th Anniversary of the voyage of the Steamship Royal William.

The Royal William's 1833 voyage was the first trans-Atlantic passage by a steamship.

The six Canada stamps shown above were issued on May 4, 1935 to celebrate the 25th Anniversary of the Reign of King George V.

The new portrait definitive Canada stamps shown above were issued on June 1, 1935.

The five pictorial definitive Canada stamps shown above were issued on June 1, 1935.  These stamps are all engraved and perforated 12.

Return to Dominion of Canada Stamps
From Issues of 1933-1935

The stamp shown above was issued on July 24, 1933 (Scott #203) to celebrate the World's Grain Exhibition & Conference, held in Regina, Saskatchewan.

This commemorative stamp was issued on July 1, 1934 (Scott #208) to celebrate the 400th Anniversary of the Landing of Jacques Cartier.

This stamp was issued on July 1, 1934 (Scott #209) to commemorate the 150th Anniversary of the Emigration of the United Empire Loyalists to Canada from the United States, during the American Revolutionary War.

The stamp design features an emigrant group from the Loyalist Monument in Hamilton, Ontario. 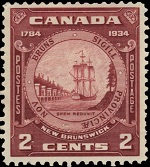 The 2 C. denomination stamp shown above was issued on August 16, 1934 (Scott #210) to commemorate the 150th Anniversary of the founding of the Province of New Brunswick, created by the partitioning of the British Colony of Nova Scotia in 1784.

The design features the Seal of the Province of New Brunswick.