Commemorative Canada stamps led off the year 1927, celebrating another anniversary of the Canadian Confederation, and in 1928, the Admiral Series was finally replaced by a new set of portrait and pictorial definitive stamps. 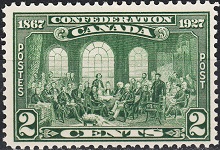 The five commemorative Canada stamps shown above were issued on June 29, 1927 to celebrate the 60th Anniversary of the Canadian Confederation.

The three commemorative Canadian stamps shown above were originally supposed to be issued in July 1926, but their release was deferred to June 29, 1927.

The new definitive Canada stamps shown above, featuring the portrait of King George V, were issued between 1928 and 1929.  These designs are referred to as Scroll Issue by Canadian philatelists. 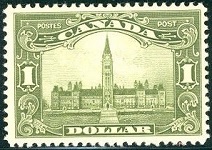 The five pictorial definitive Canada stamps shown above were issued during 1928 and 1929.  These stamps are all engraved and perforated 12.

Return to Dominion of Canada Stamps
From Issues of 1927-1929