All of the Canada stamps issued between 1911 and 1926, with only one exception, are part of what Canadian philatelists refer to as the "Admiral Series" of definitive postage stamps.  This series is one of the favorite collecting specialties of Canadian philatelists, and the existing varieties are immense.

It's not really as bad as it looks at first.  Actually, only eleven different definitive stamp denominations were issued during this period!  But, it's as if they couldn't make up their minds which colors or formats they wanted to use for each of the stamps.  And that's where the rather complex philatelic fun begins!

The first definitive Canada stamps, featuring the left-facing portrait of King George V, were issued in sheet format between 1911 and 1925.  These stamps were all engraved, unwatermarked, and perforated 12.

Only eleven definitive stamp denominations were issued, but there were many changes over the life of this series.  One could almost make a specialty out of just collecting the color and shade varieties of these stamps.

The first coil format Canada stamps, for use in vending machines, were issued between 1912 and 1924.

These are the vertical coils, perforated 8 horizontally:

These are the horizontal coils, perforated 8 vertically: 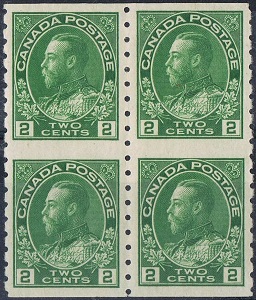 Sheets intended for the manufacture of perforated 8 coil stamps were sold in vertical pairs and blocks, so that the adjacent stamps are imperforate between.  Some of these varieties are actually quite inexpensive.

The four coil format stamps shown above, utilizing a different perforation gauge, were issued between 1915 and 1924.

Return to Dominion of Canada Stamps
From Issues of 1911-1926

The 3 C. denomination commemorative stamp (Scott #135) shown above was issued on September 15, 1917 to celebrate the 50th Anniversary of the Canadian Confederation.

The design features the famous 1883 painting, "Fathers of the Confederation", by Robert Harris (1849-1919).  The original painting hung in the central block of the Parliament Building in Ottawa, and it was completely destroyed by a fire there in 1916.  Only photographs of the original work remain.

The painting is actually somewhat of an enigma.  The figures in the painting are a composite of the delegates that attended the Charlottetown and Quebec Conferences of 1864.

They are all shown above.

The 3 C. denomination carmine definitive stamps were revalued to "2 Cents", with the overprint coming in two different formats.

Significant errors exist on both of these revalued stamps.