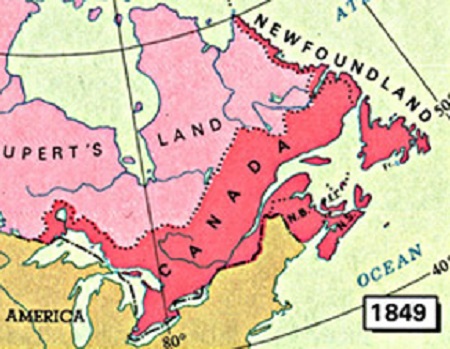 Province of Canada stamps were among the first adhesive postage stamps to be issued by the British colonies in North America.

The Province of Canada was formed as a result of the Union Act of 1840.  The new province consisted of the former North American provinces of Lower Canada and Upper Canada.  Upper Canada occupied the southern border of modern Ontario along the St. Lawrence River.  Lower Canada occupied the Southern and Eastern borders of modern day Quebec along the St. Lawrence River, and part of Labrador.  These two combined territories were known as the United Province of Canada or United Canada.

Between the northern borders of the Province of Canada and Hudson Bay at that time was Rupert's Land, part of the Hudson Bay Company.

All Province of Canada stamps are printed on unwatermarked paper, and they depict four common subjects, as outlined below (in order of their chronological appearance):

The three Province of Canada stamps shown above were issued in 1851.  They are imperforate and are printed on laid paper.

The Black postage stamp, with the profile of Queen Victoria, was denominated as 12 Pence, instead of 1 Shilling, due to varying exchange rates for the Shilling in North America.

Approximately 51,000 of these Province of Canada stamps were printed by Rawdon, Wright, Hatch & Edson of New York City.  They were never popular, as the poor quality vertically laid paper annoyed both postal officials and the public, and there was little demand for a stamp of this denomination.  The gum on the laid paper stamps did not adhere well to envelopes, which often required their being glued to the envelope.  The 3 Pence and 6 Pence denomination Canada stamps were later re-issued on good quality wove paper, but no further printings were ever made of the 12 Pence denomination.

The 3 P. and 6 P. denomination stamps were reissued between 1852 and 1857.  They are imperforate and are printed on wove paper.

The 6 P. denomination was reissued in 1857 on very thick, soft, wove paper.  These stamps are easily damaged, if mishandled.

Where is Scott #6 ??  It was once thought that the 12 P. denomination had been produced on wove paper (Scott #6).  It is now believed that this was never true, and no authenticated examples have ever been found.

The 10 P. denomination Canada stamp shown above was issued in 1855.  The stamp is imperforate, and it was produced on both regular wove paper and thick wove paper.  The thick paper stamps are the more expensive of the two varieties.

The 1/2 P. and 6 P. denomination stamps shown above were issued in 1857.  They are imperforate and printed on wove paper of normal thickness.

The 1/2 P. denomination stamp also exists on varying types of ribbed paper, and these stamps are very rare.

Between 1858 and 1859, the first perforated Province of Canada stamps appeared.  These stamps are all perforated 12.

In 1857, the decision was made to abandon the British Pound Sterling currency in favor of a new decimal currency, based on the United States Dollar.  The change to the new Canadian Dollar took place in 1859, though the British Gold Sovereign (Pound) still remained legal tender there.

The first decimal currency stamps of the Province of Canada were issued between 1859 and 1864.  They are all shown above.  The designs are the same as those of previous issues, but the stamp denominations are different.

At least in the author's opinion, one of the most beautiful Canadian stamps ever produced is the 12 Pence denomination stamp issued in 1851.

There is hope though!  The stamp shown above is Canada Scott #3 -- with a vertical "SPECIMEN" overprint in red.  These are much more obtainable than the original stamps issued at post offices in the Province of Canada.

The beautiful stamp shown above can be obtained for about the price of a mortgage payment (around $1,600), instead of the price of one's house!

With a little bit of financial suffering, many Canadian collectors could eventually own one of these without going completely bankrupt in the process!